This is a report written by Jojo Tulloh of a Guild Workshop that took place on Tuesday 31 January 2017 at 6.30pm at Westminster Kingsway College, Vincent Square, London SW1P 2PD.

On a Monday night on the last day of January 2017 in the demonstration kitchen of Westminster Kingsway College, three farmers, one chef and several advocates for quality grass-fed mutton from the Pasture-Fed Livestock Association (PFLA) gathered in front of a bevy of curious Guild members to discover just how good this once ubiquitous British ingredient could really taste. 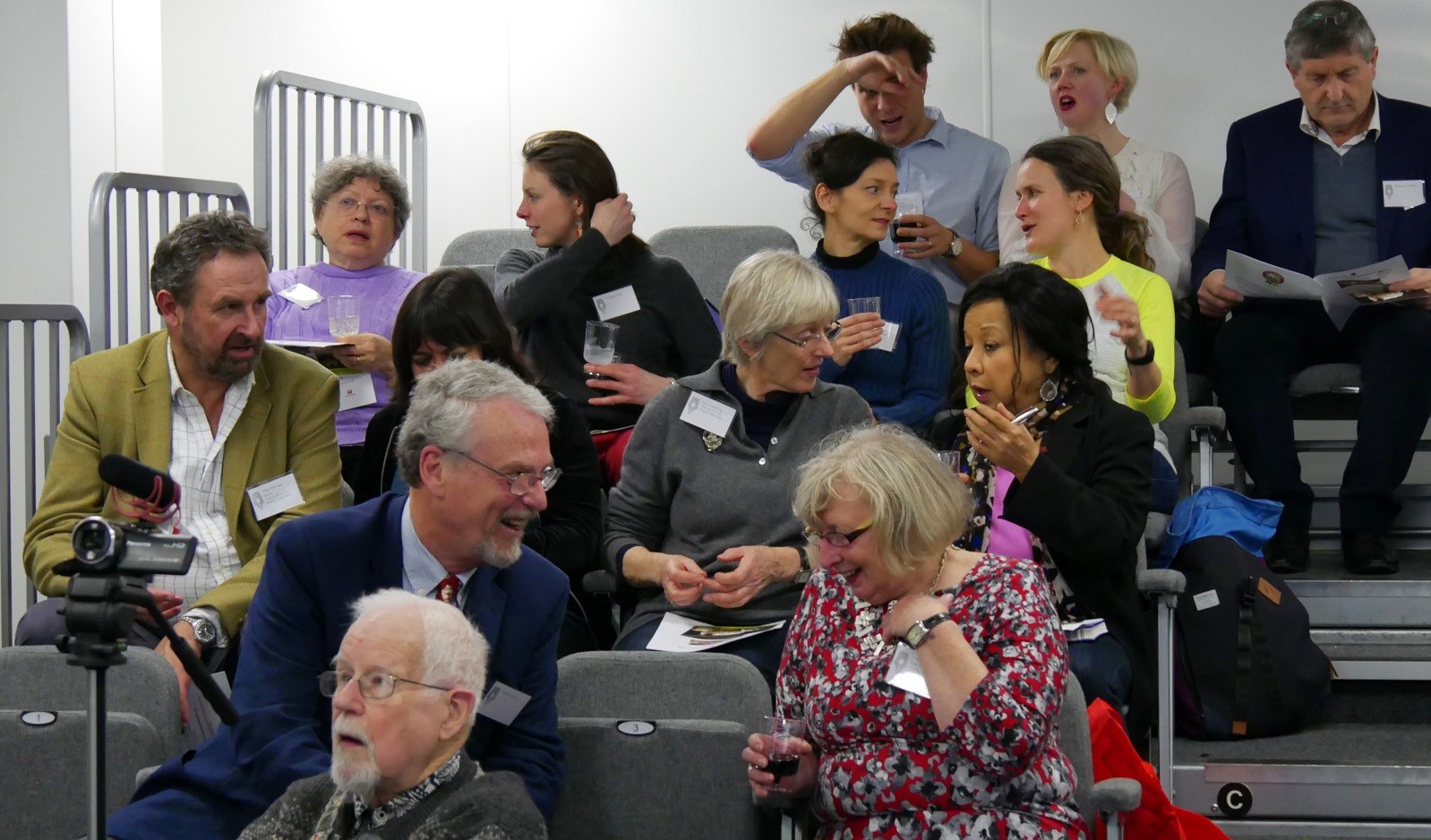 Farmers Nick Miller, Simon Cutter and Dan Bull had travelled from Monmouthshire, Herefordshire and Berkshire to bring us their three different muttons from Black Welsh Mountain, Easycare and Shetland sheep of varying ages. Behind them plates were being loaded with cuts of the first offering (Black Welsh Mountain) roasted medium-rare and carved by chef Christopher Trotter and served with a palate cleansing salad on the side. The idea was to taste each one (trying to save a little of each to compare at the end) and have a bit of salad in between. 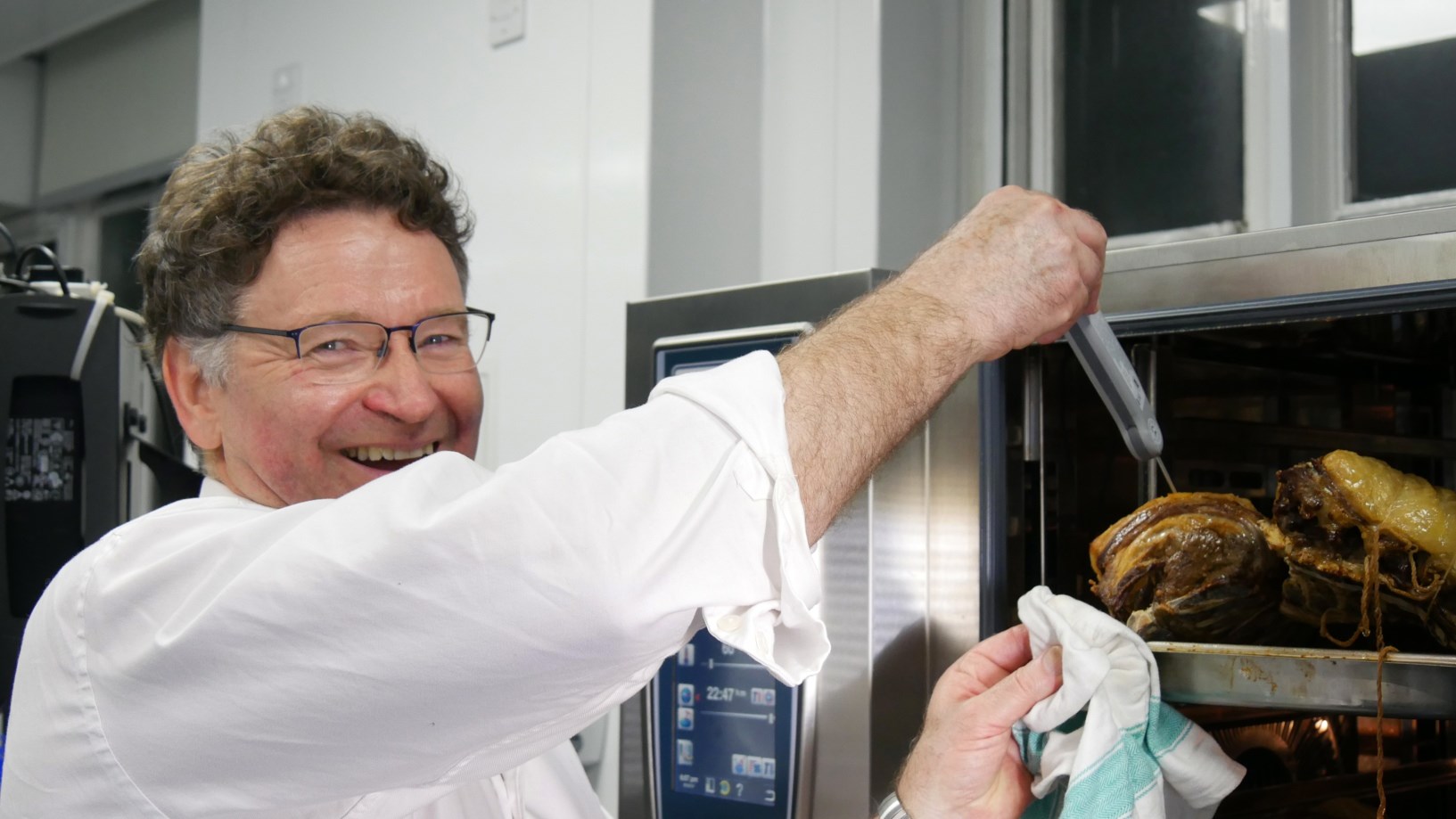 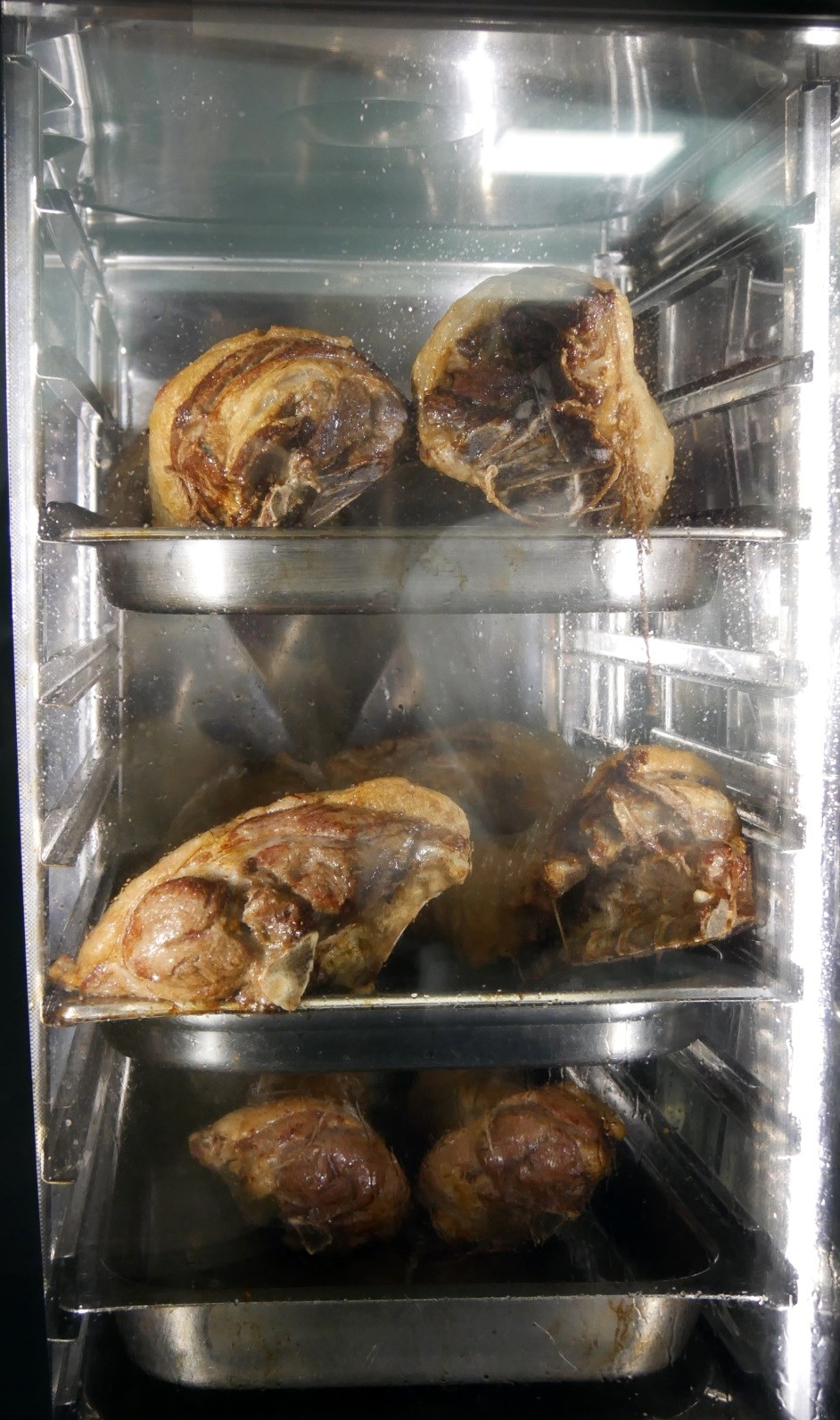 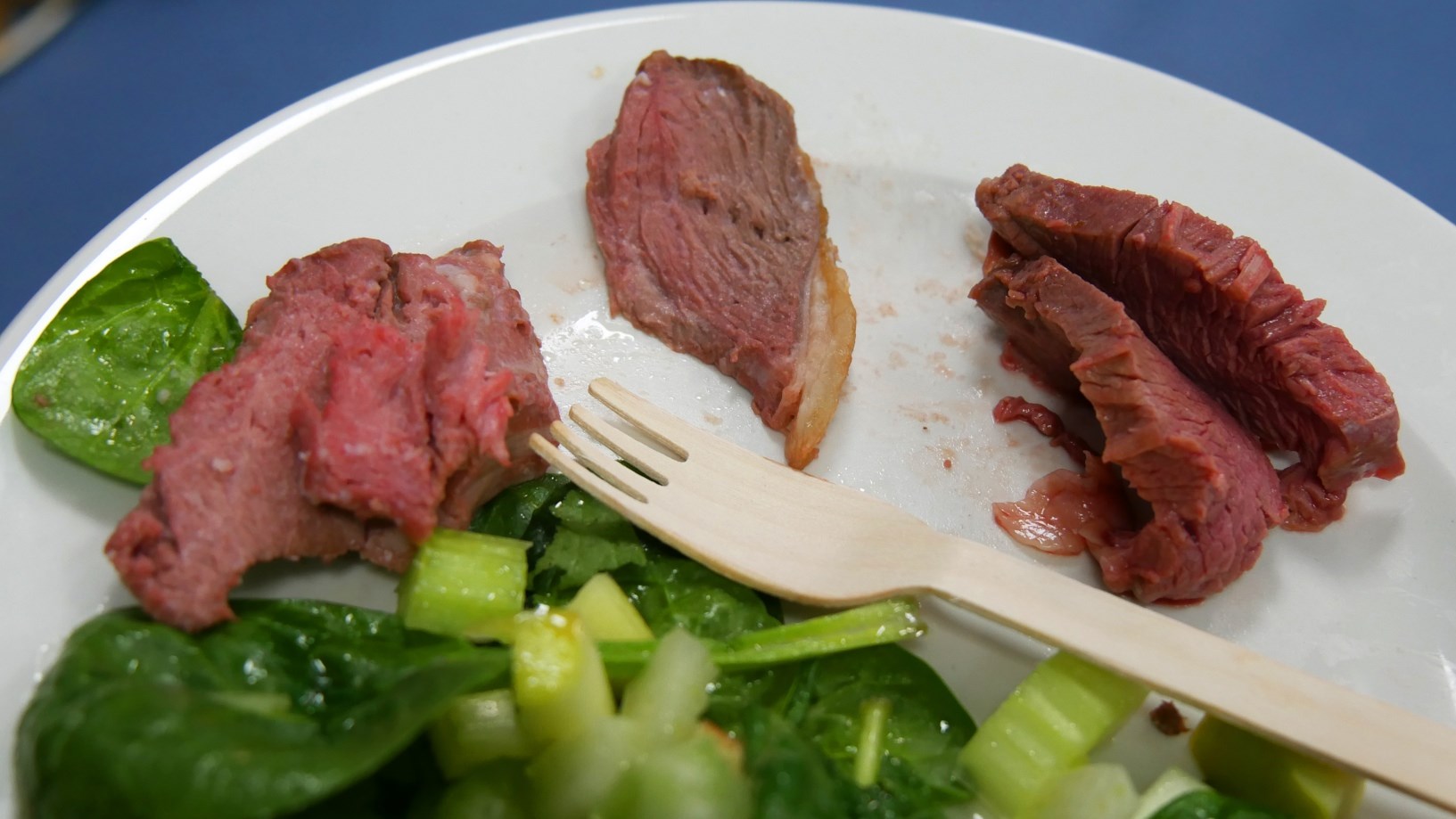 Testing the quality of the mutton by eating it medium-rare

Mutton enthusiast and author of the book Much Ado About Mutton Bob Kennard spoke first, giving us some background to the history of mutton eating in this country. Helpfully he began with a definition of what mutton is and how it differs from lamb. Lamb is meat from 0-1 years, hogget from 1-2 years and mutton 2 plus years (the oldest we ate on the night was 8 years). Historically there was mutton from castrated males – wethers – and meat from breeding females who were either too old to lamb or had lost their teeth – ewe mutton. 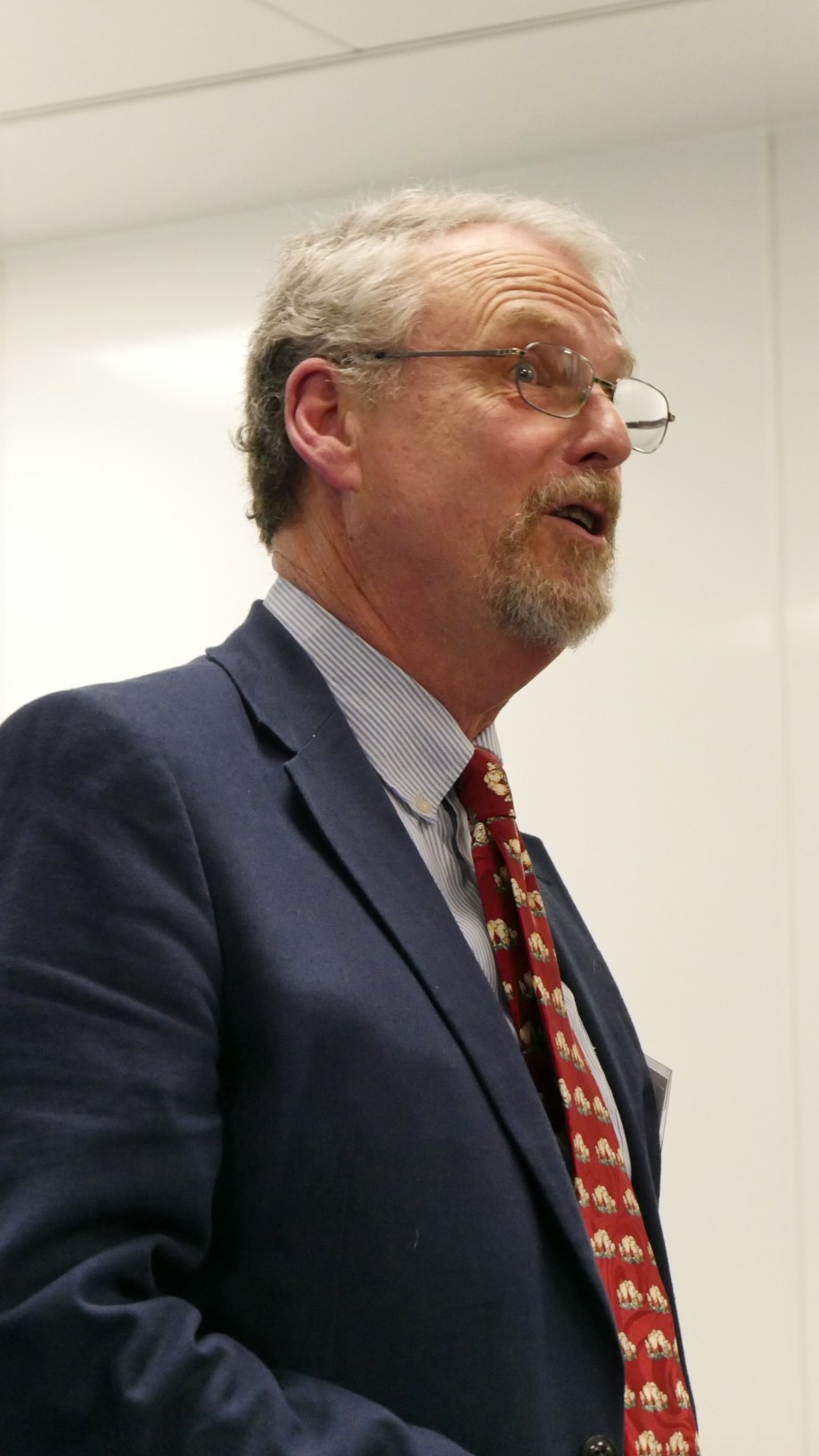 It may be hard to imagine now but mutton was at one time (mid 19th century) more popular than beef. So why did its culinary star wane? One reason was cheap imports from the New World; the other was our own increased efficiency in producing lamb. With a rising population we needed more meat and faster – lamb could be raised that much more quickly. Bad wartime experiences of tinned Australian mutton also put a generation off mutton. With no real demand there was little incentive (until now) for farmers to raise sheep specifically for mutton.

During the Victorian era, mutton meant meat over 4 years but up to 10 or 12 years was also acceptable. Quality mutton in Victorian times meant meat that was grazed on natural grass and herbage and was properly hung afterwards. Why is this a traditional ingredient to be cherished? According to Bob, because it is flavoursome and can be tender if well hung; it enhances upland farmer’s income; and when farmers select the best animals for sale they can get a premium price for their meat. For those interested in nutritional qualities, slow-grown mutton has the best Omega 3 to Omega 6 ratio of any domestic meat. Bob had many quotes for us (from Mrs Beeton to Jonathan Swift) including this one from Lord Cockburn who was a great advocate for Scots mutton. This excerpt neatly describes the ideal life of a sheep raised for top quality mutton and introduces the charming concept of a ‘muttonised life’:

‘I think it is my duty to record the unmatched merits of a leg of mutton we had today at dinner. It was a leg which stands out even amidst all the legs of my long and steadily muttonised life. It was glorious. A leg of which the fat flats of England can have no idea, and which even Wales, in its most favoured circumstances, could only approach. It was a leg which told how it had strayed among mountains from its lambhood to its death. It spoke of winter straths and summer heights, of tender heather, Alpine airs, cold springs, and that short sweet grass which corries (a Scots breed) alone can cherish. These were the mettle of its past. It left its savour on the palate, like the savour of a good deed on the heart.’ 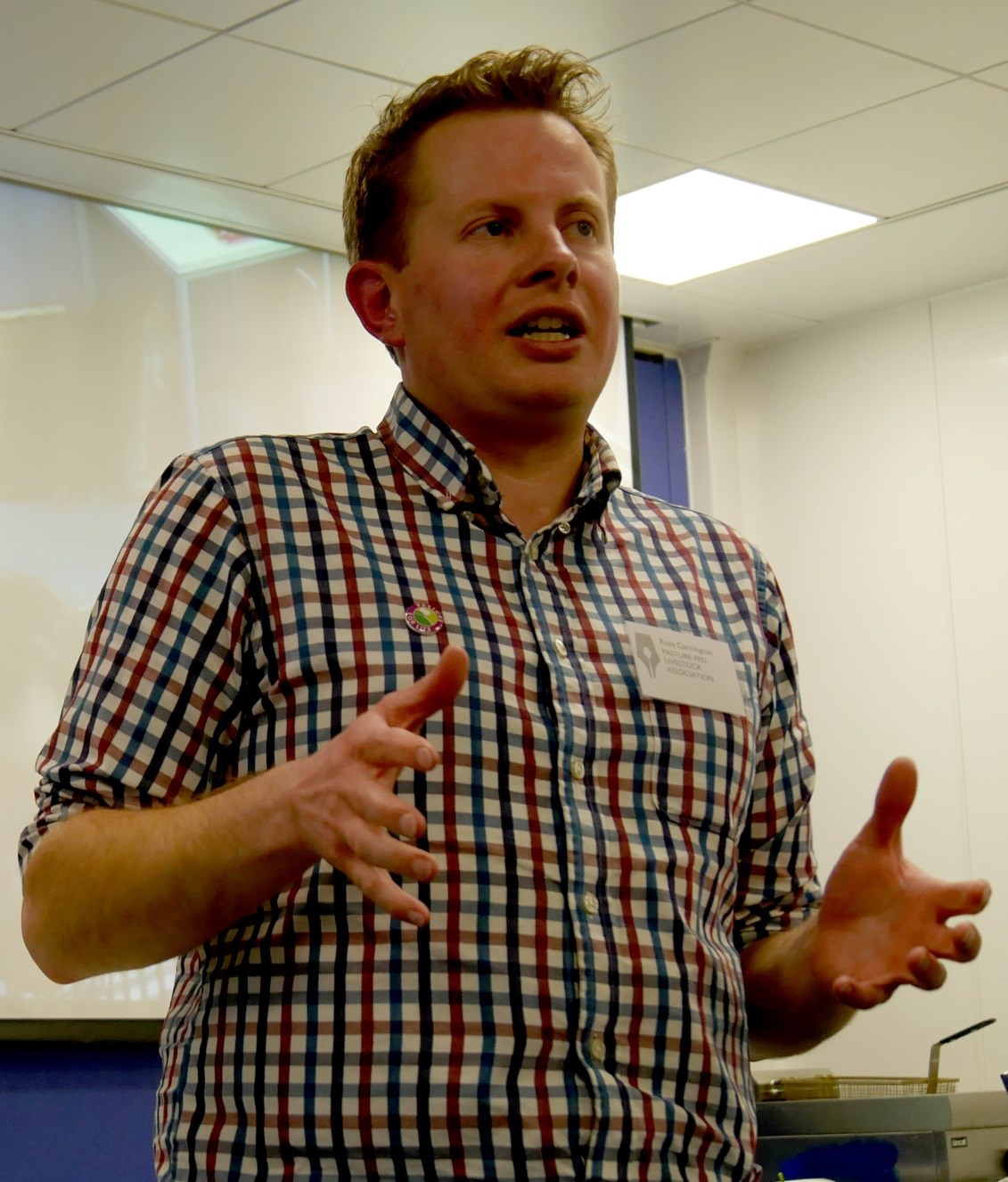 Next Russ Carrington from the PFLA briefly told us how this organisation has worked to create a certification mark that consumers can trust and understand. The PFLA promotes 100% grass fed beef and lamb. Russ explained how pasture is more than grass but is a diverse foodstuff; for meadowland is rich in clovers, grass, herbals and wildflowers. All PFLA meat has labels that contain links to information about the farmers who produced the meat you are buying. The transparency available in the ability to track all individual meat is key to making their certification mark trustworthy.

Whilst all this information was being absorbed we did what everyone was longing to do and tasted the mutton. The first (Welsh Black Mountain) was revelatory, tender, lean but juicy with a thin layer of crisp fat with an intense yet not fatty flavour. It had a good close grain and a grassy flavour. Nick Miller’s mutton was from a 4 year old animal, raised on his 20-hectare farm situated beneath the slopes of Skirrid Mountain, just outside Abergavenny. This breed is smaller than commercial breeds (15-20kg) and so produces smaller, leaner cuts. It was slaughtered at organically approved Broomhall’s of Stroud and hung for three weeks in temperature and humidity controlled conditions and butchered at Model Farm, Ross on Wye. Nick sells his meat to restaurants (including Shaun Hill at the Walnut Tree Inn) and through their website. 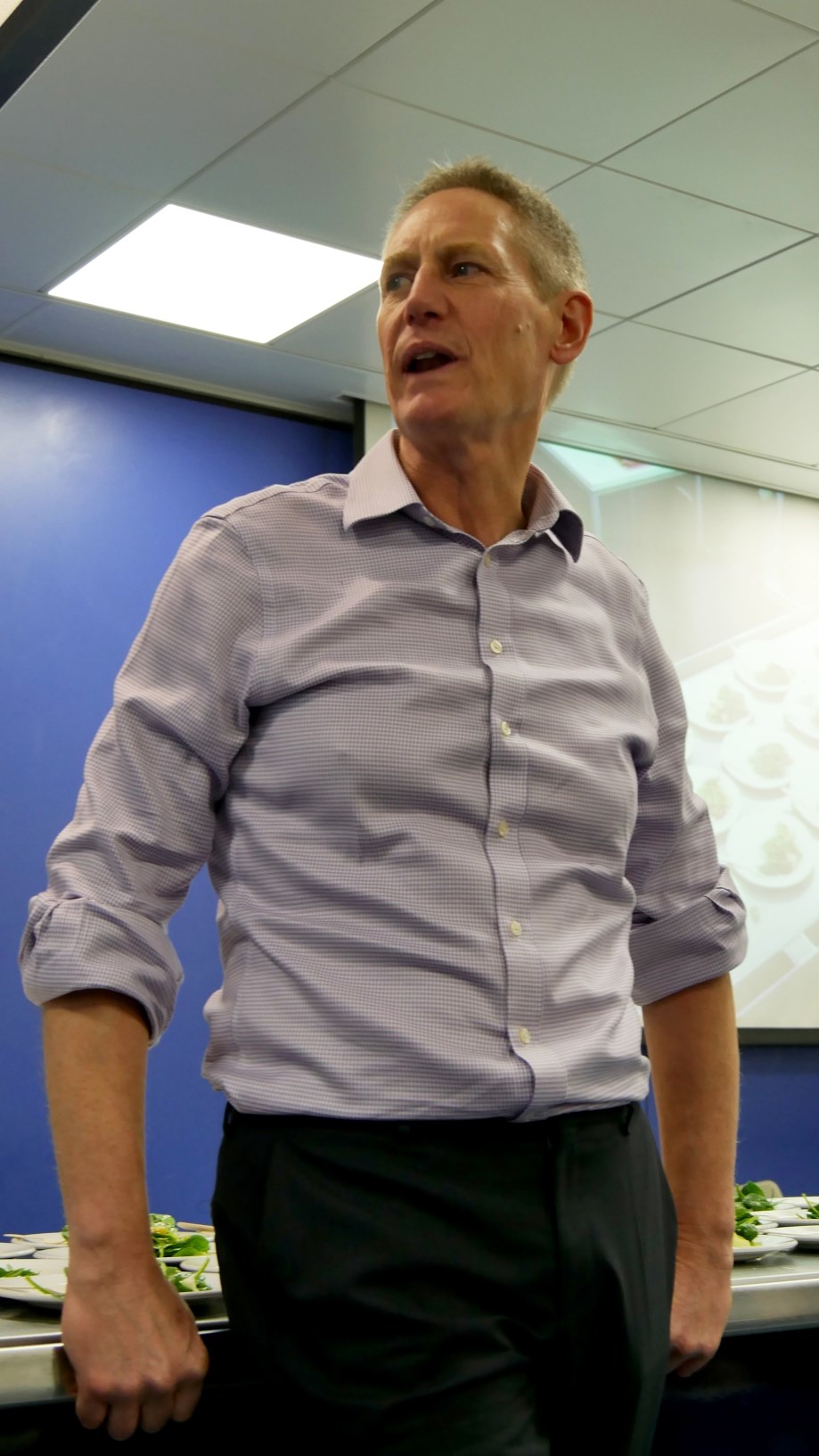 Simon Cutter of the Model Farm, Ross on Wye spoke next. Simon is a tenant farmer on 550 acres, which include species rich flower meadows on which he grazes Hereford cows and 550 Easycare ewes (Wiltshire Horn X Nelson Welsh Mountain). He is the founder of the Model Farm Shop (a co-operative of Hereford farmers where you can buy ‘Pasture for Life’ beef, lamb and mutton as well as free-range chicken and pork). What makes Simon unusual (and interesting to us as food writers) is that he and his son also hang and butcher meat on their farm (they prepared Nick’s mutton). Simon talked to us about how the ewe we were eating had lost her teeth and was struggling to graze so had come to the end of her life on the farm. During her 8 years she would only have ever eaten herb rich meadows and never had wormers or antibiotics. This then is an animal that has been looked after and nurtured by a farmer for a considerable amount of time. It is an entirely different thing from meat fattened rapidly on protein-rich concentrates for a quick sale.

Simon was keen to impress on us that while grazing and age of the meat impacts taste equally important is how meat is looked after post-slaughter. A good butcher and proper hanging makes a huge difference to the taste of the meat. Simon described how you can tell when properly hung mutton is ready: it should have relaxed enough to ‘take a thumb print’. During the hanging time the fat protects the meat from drying out (it usually loses about 10% of its weight during the hanging process). He also said it was up to us to help consumers understand that with pasture-fed meats there would be seasonality and the same products would not be available throughout the year. His meat was the oldest and had a stronger gamier flavour and the most open grain. It was still remarkably tender. Some people preferred this one the most. 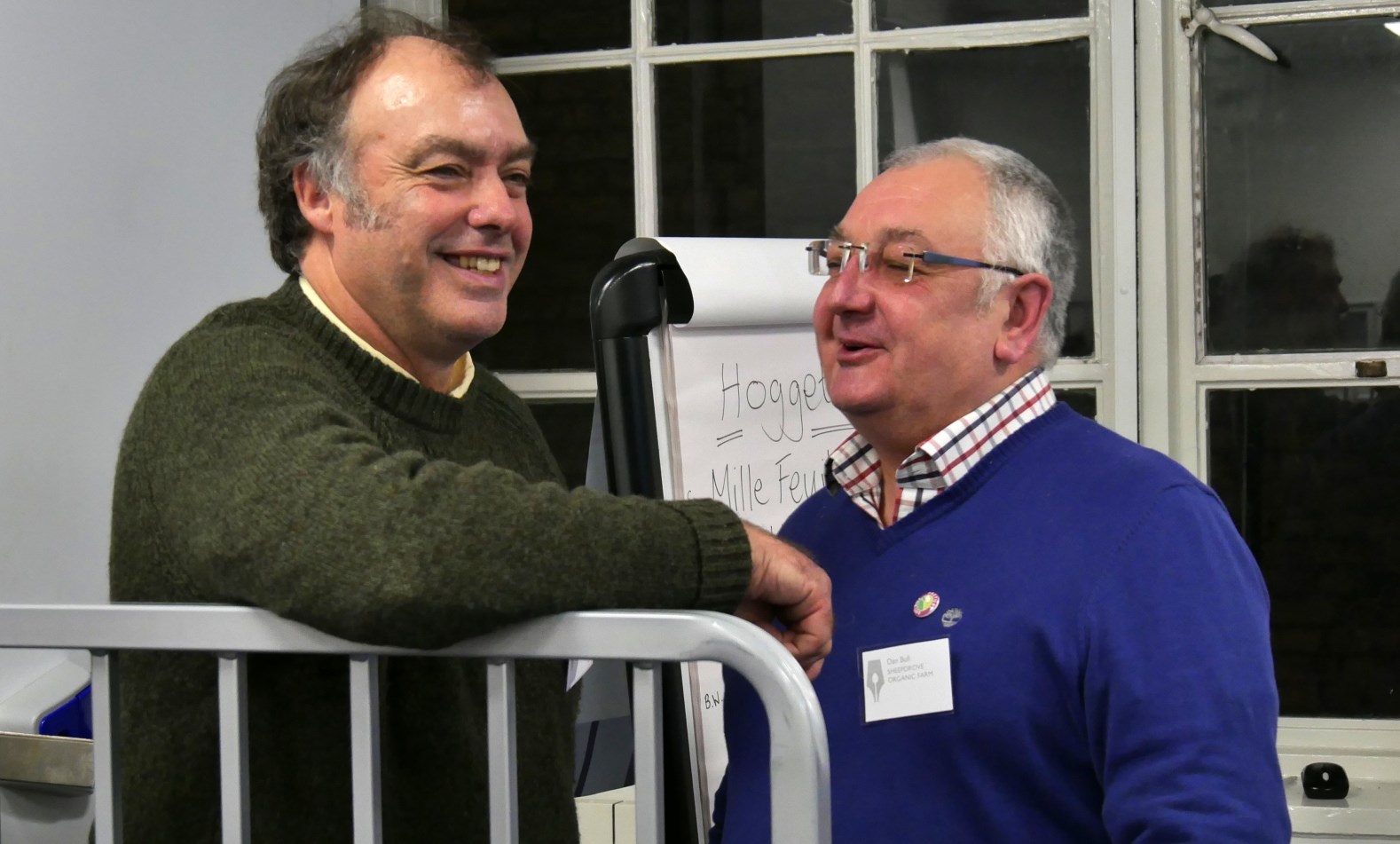 Dan Bull, farm manager of Sheepdrove Farm, just outside Lambourn in Berkshire, was the farmer managing the biggest farm (2,500 acres). He had a two-year-old beast for us; at Sheepdrove they keep sheep for hogget (1 year +) and for mutton (3-4 years) but demand was such that the latter meat had all been sold. At Sheepdrove they are unusual in that they are rearing animals purely for mutton all the year round. The mutton was from a Shetland sheep (like Black Welsh Mountain a smaller breed). They also hang and butcher their own meat, which they sell out of a farm shop in Maida Vale, London. The meat was grazed on chalk and had a mild mineral taste, very smooth and creamy. It had been hung for two weeks. 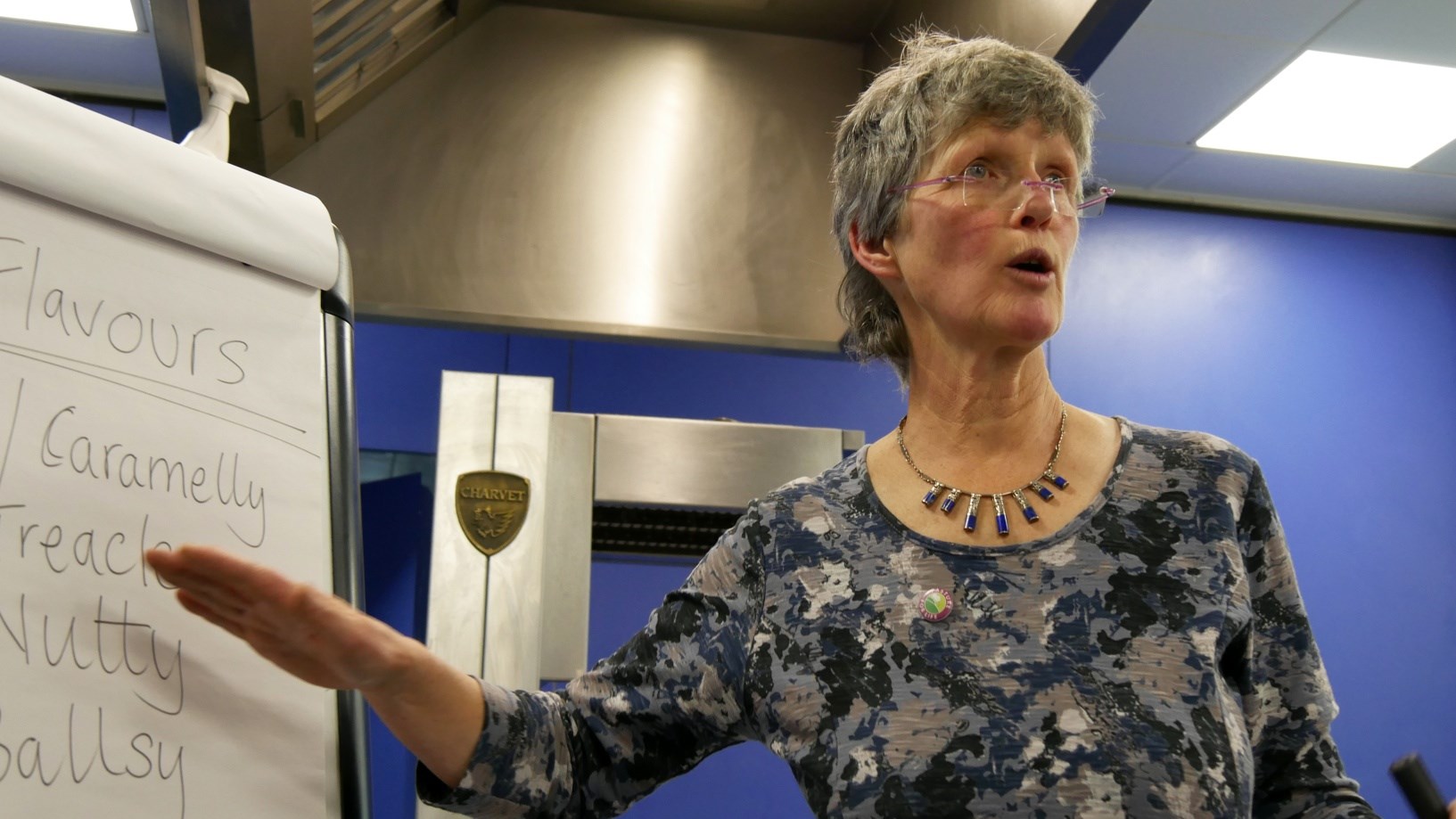 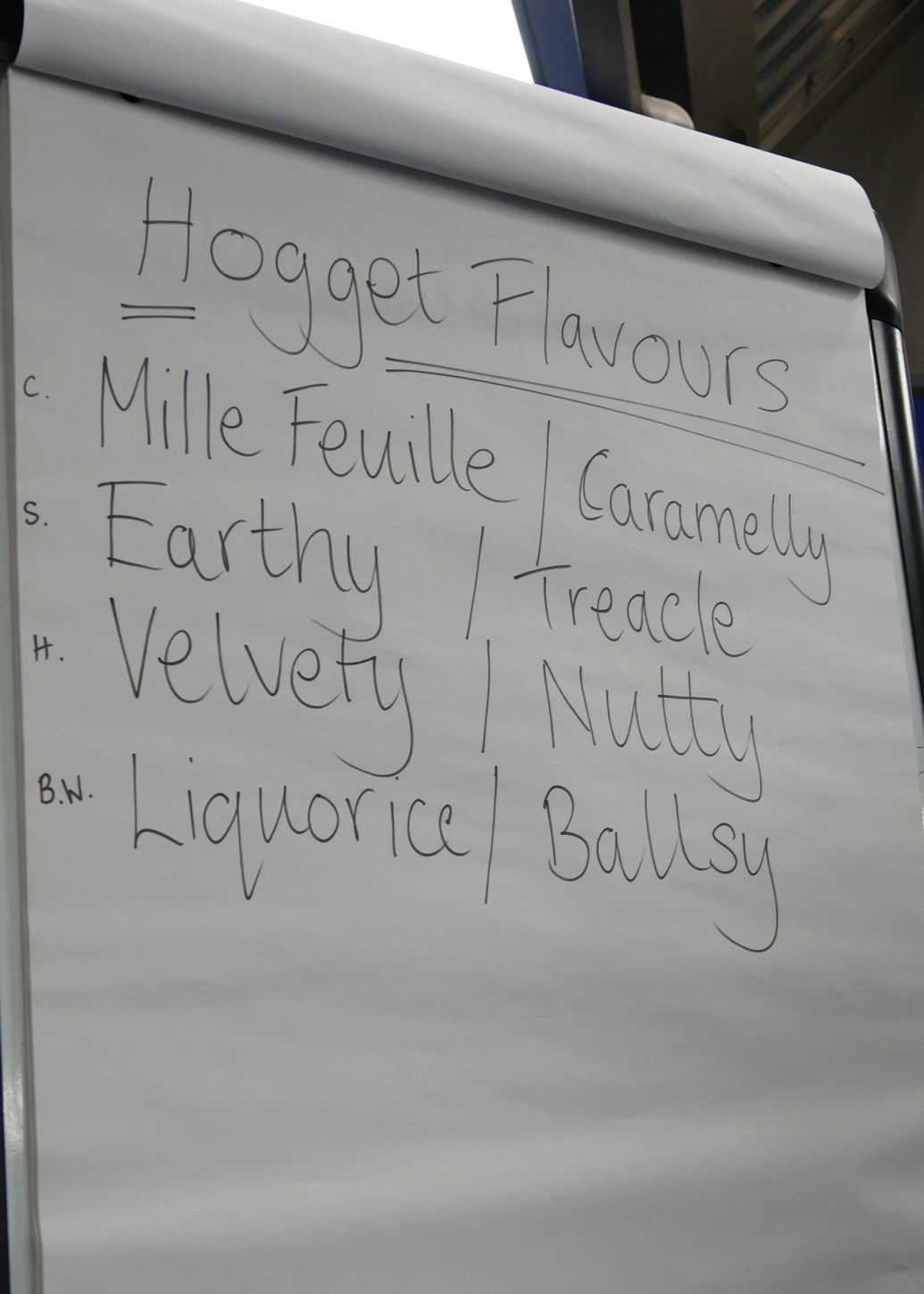 Fidelity Weston of Romshed Farm and the PFLA came to the front and invited us as food writers to think of new words to describe mutton. We talked about how the pasture informs the taste and lots of words were called out and noted. Fidelity also talked about how on her farm mutton was a seasonal meat produced in synch with the breeding cycle. The ewes are examined in September / October and those not deemed suitably for tupping (breeding ewes) are sent for slaughter (mutton ewes). Later on, just before lambing, the ewes are scanned (to see whether they are carrying twins or triplets and might need extra help) and those empty of foetuses are sent for slaughter. This means that on her farm mutton is available in autumn and spring but not summer. We discussed how as consumers we need to demand more information about mutton in the same way that beef has become a product where breed and aging are something meat buyers now except to know when buying quality meat. The general response to the meat tasted was highly flavourable with many expressing amazement at how different (tender, delicately flavoured) what we had tasted was to the general perception of mutton as a fatty, more coarsely flavoured meat. There was a general feeling that grass fed mutton is a premium ingredient which deserves to be more widely written about and eaten.

Whilst we eating the last meat Christopher Trotter described how he had cooked the meat and also which parts were most flavoursome. He found the chump end most toothsome and the fillet a little disappointing. Christopher described how he had roasted the whole loin (from shoulder to chump) rare and ‘blasted it for ten minutes to seal the outside’ when the meat reached 50°C in side he turned the oven right down to 60°C and let it rest. Speaking to Bob Kennard afterwards he was a little nervous about this approach, fearing that without Christopher’s skill (and possibly his fierce professional oven) mere mortals might not achieve such good results. Bob advised slow cooking. Like me Bob’s favourite mutton was the first we tasted. 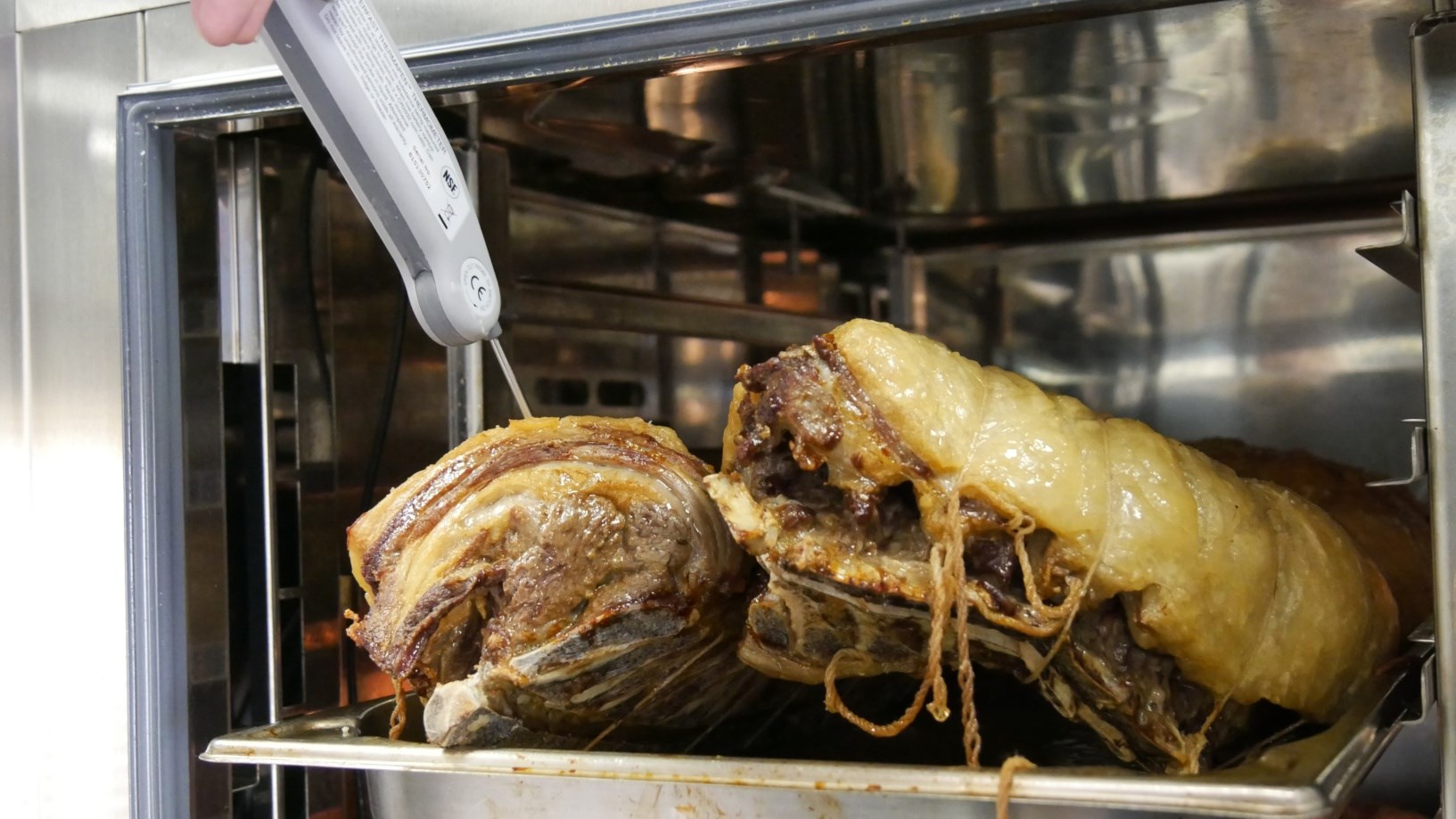 I had primed myself for the evening by reading the mutton chapter in Dorothy Hartley’s Food in England. It’s comprehensive and evidence of how important mutton once was. Even before the mutton workshop I was aware that we once had (and lost) a countrywide variety of breed that produced different flavours in mutton. One suggestion to push mutton as a quality ingredient was to attach the breed’s name to the meat: Hebridean mutton, Black Welsh Mountain mutton and so on. Not only does Food in England include an immense variety both of cuts of meat and traditional dishes (from mutton ham to a raised pie with redcurrants on top) we could be making. Thanks to the work of the farmers we met this evening we can now enjoy meat of the same quality that our discerning ancestors did. Whilst we can enjoy meat this tasty unadorned there are also a huge range of native ingredients laver (seaweed), rowan berry, barberry, redcurrant, mint, rosemary and thyme we could be using alongside mutton to create dishes that are authentic historically but also innovative because they have disappeared from our kitchens. 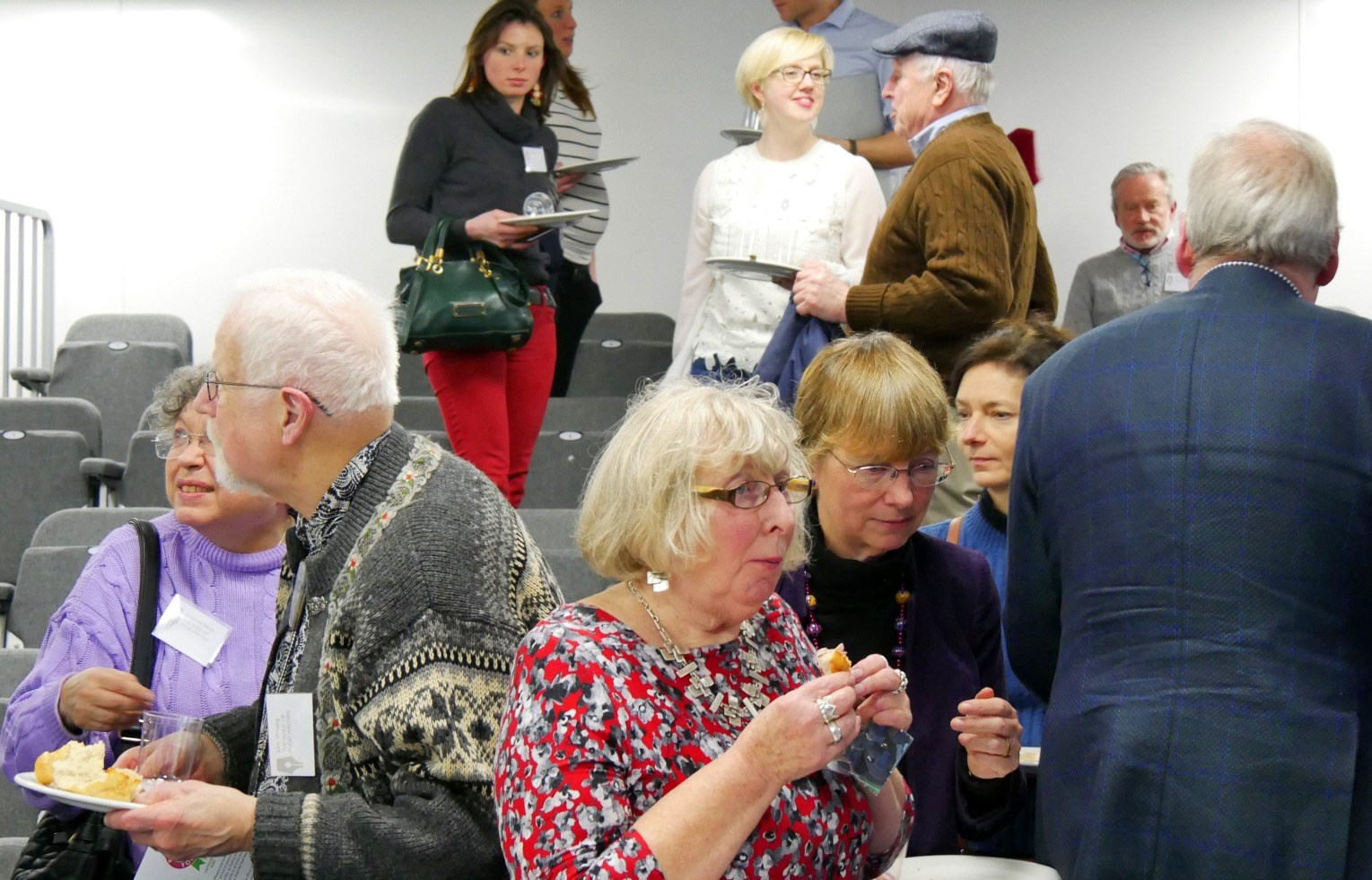 Many members went back for seconds; many had their favourites

Guild member John Whiting made a video recording of this workshop and you can see what happened at youtube.com/watch?v=YACdN1J2Yfo&feature=youtu.be 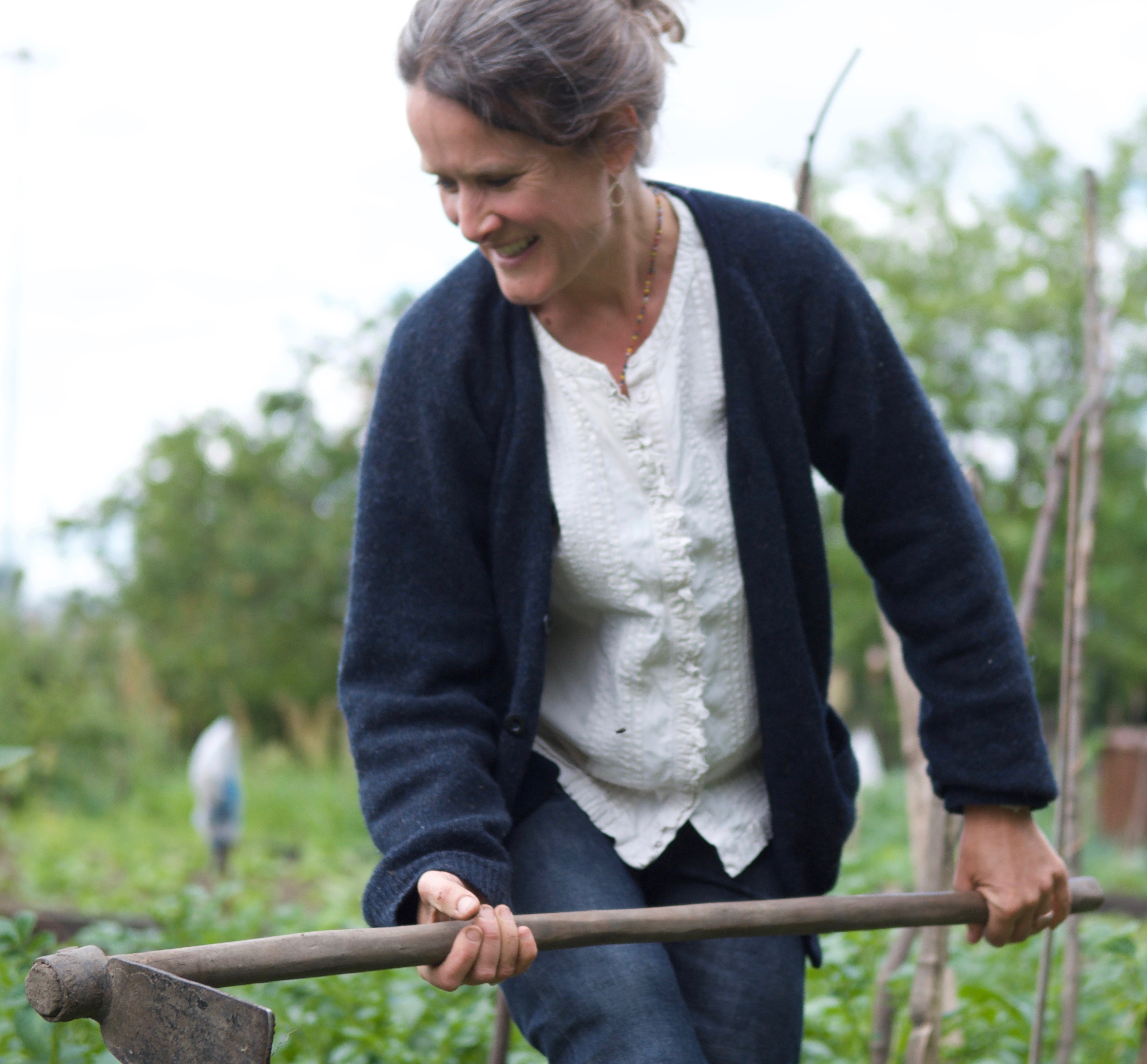