A Dark History of Chocolate

Time: 11am
Price: Free. Open to Guild members only.

A Dark History of Chocolate will explore some of the key elements of Emma Kay’s new book of the same name. This will be a bit more of an interactive workshop with readings from the book itself, a demonstration with a metate and a look at a few other objects alongside the stories themselves.

From the seductive corridors of Versailles, serial killers, witchcraft, medicine and war to its manufacturers, the street sellers, criminal gangs, explorers and the arts, chocolate has played a significant role in some of the world’s deadliest and gruesome histories.

If you thought chocolate was all Easter bunnies, romance, and gratuity, then you only know half the story. This most ancient of foods has a heritage rooted in exploitation, temptation, and mystery. With the power to be both life-giving and ruinous. 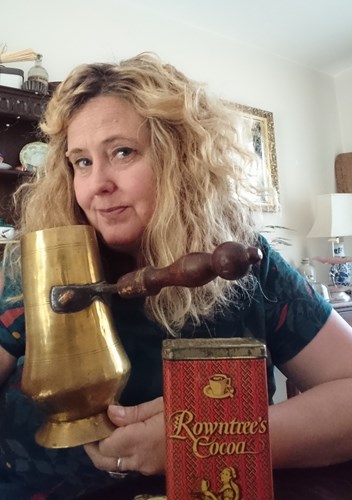 Emma Kay is a post-graduate historian and former senior museum worker. Now food historian, author with 9 books to her bow and a further few on the horizon. She is a prolific collector of Kitchenalia, and has delivered talks and food demos for literature festivals across Britain. Her articles have appeared in publications including BBC History Magazine, The Daily Express, Daily Mail, Times Literary Supplement, and the Victorian Review. She has contributed historic food research for a number of television production companies as well as appearing on Channel 5's Britain’s Lost Battlefields and Walking Britain’s Roman Roads, BBC’s Countryfile and the Best Christmas Food Ever.  Emma has featured numerous times on Talk Radio Europe and many BBC Radio stations across the UK.

Like most of the Guild's current sessions this workshop will be taking place through Zoom. Please email Guild administrator Jonathan Woods jonathan@gfw.co.uk to register and Jonathan will then send you details of how to access the events on Zoom.