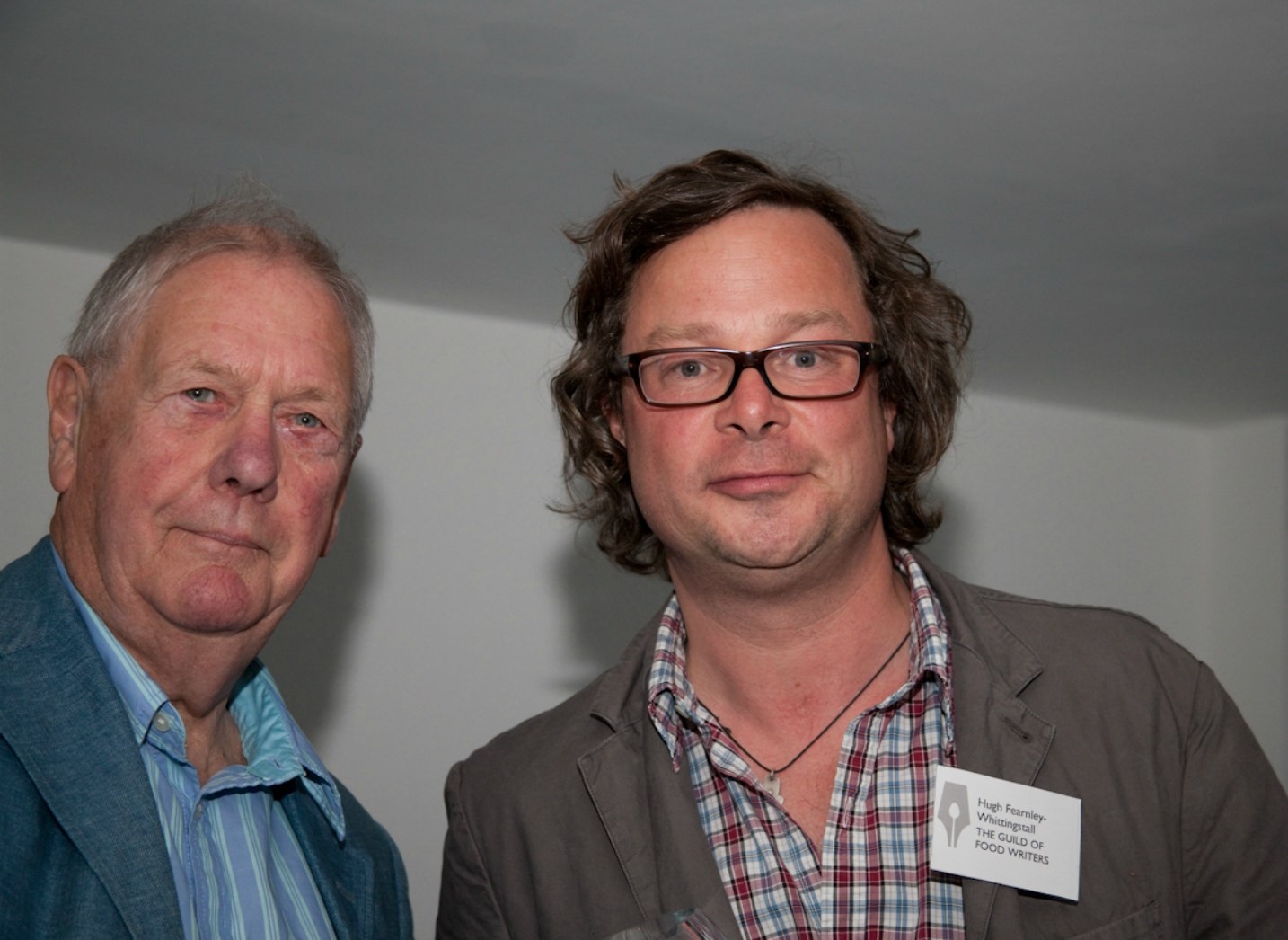 On Thursday 17 June 2010 at the Design Museum, London, the Guild of Food Writers announced the winners of their much- coveted annual Awards. Colin Spencer presented the beautiful engraved trophies to some of the industry’s finest writers and broadcasters. Amongst the 12 winners there were some familiar names and some new ones to add to the roll of honour. 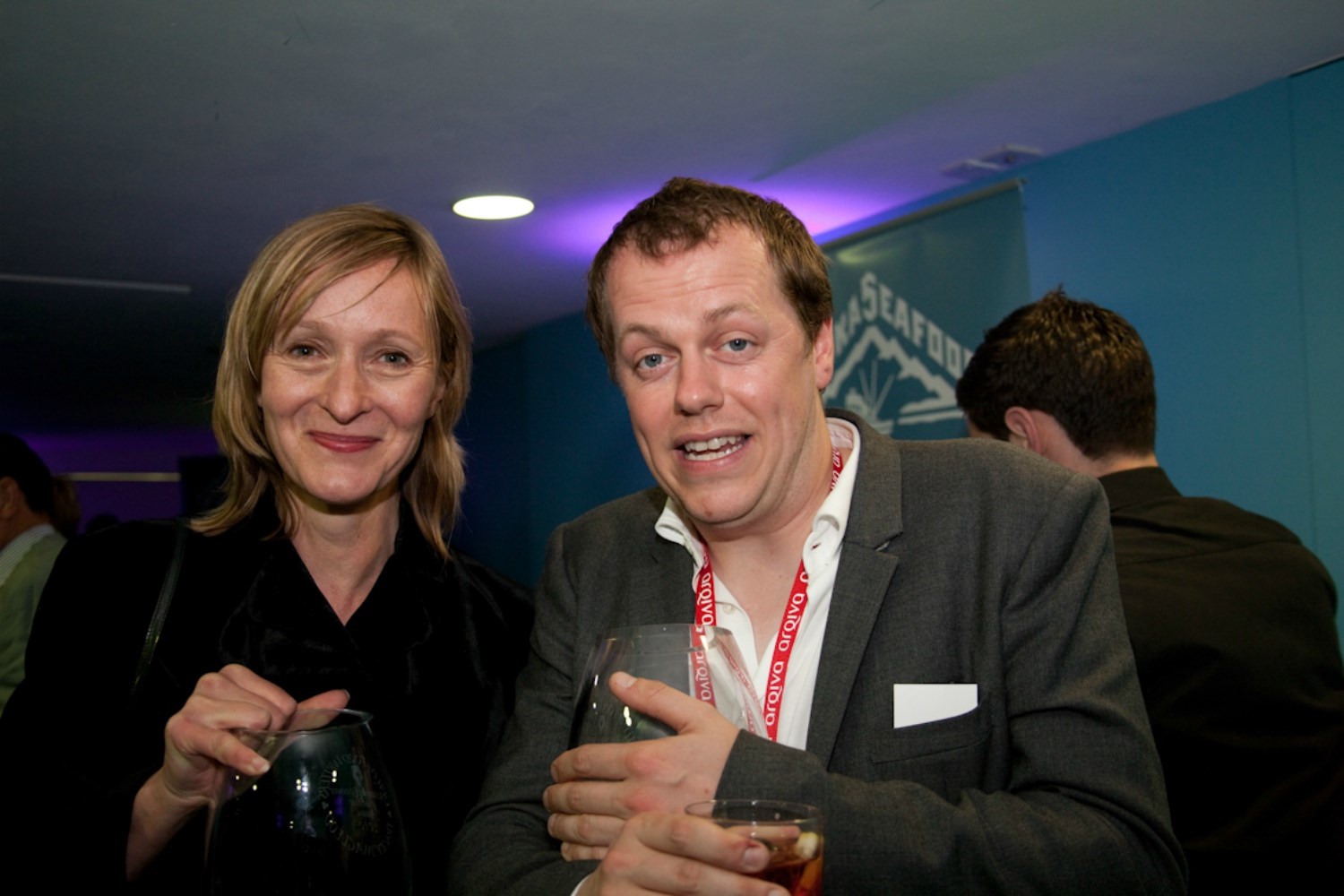 Nigel Slater, Hugh Fearnley-Whittingstall and Tom Parker Bowles were all recognised as leaders in their field.

Hugh’s triple nominations (for the Michael Smith Award for Work on British Foodfor River Cottage: Winter’s On The Way, the New Media of the Year Award for the Landshare project website and the Evelyn Rose Award for Cookery Journalist of the Year for work published in The Guardian Weekend magazine) bore fruit as Landshare and the Weekend columns won their categories. The Michael Smith Award went to Tom Parker Bowles for his travelogue Full English, which the judges said ‘evinced a deeply felt identification with all areas of food production, from farm to restaurant kitchen, and an equally deep commitment to quality.’ Nigel Slater’s Simple Suppers, loved for its ‘direct, simple advice and uncomplicated partnerships of ingredients’ won the Food Broadcast of the Year Award. 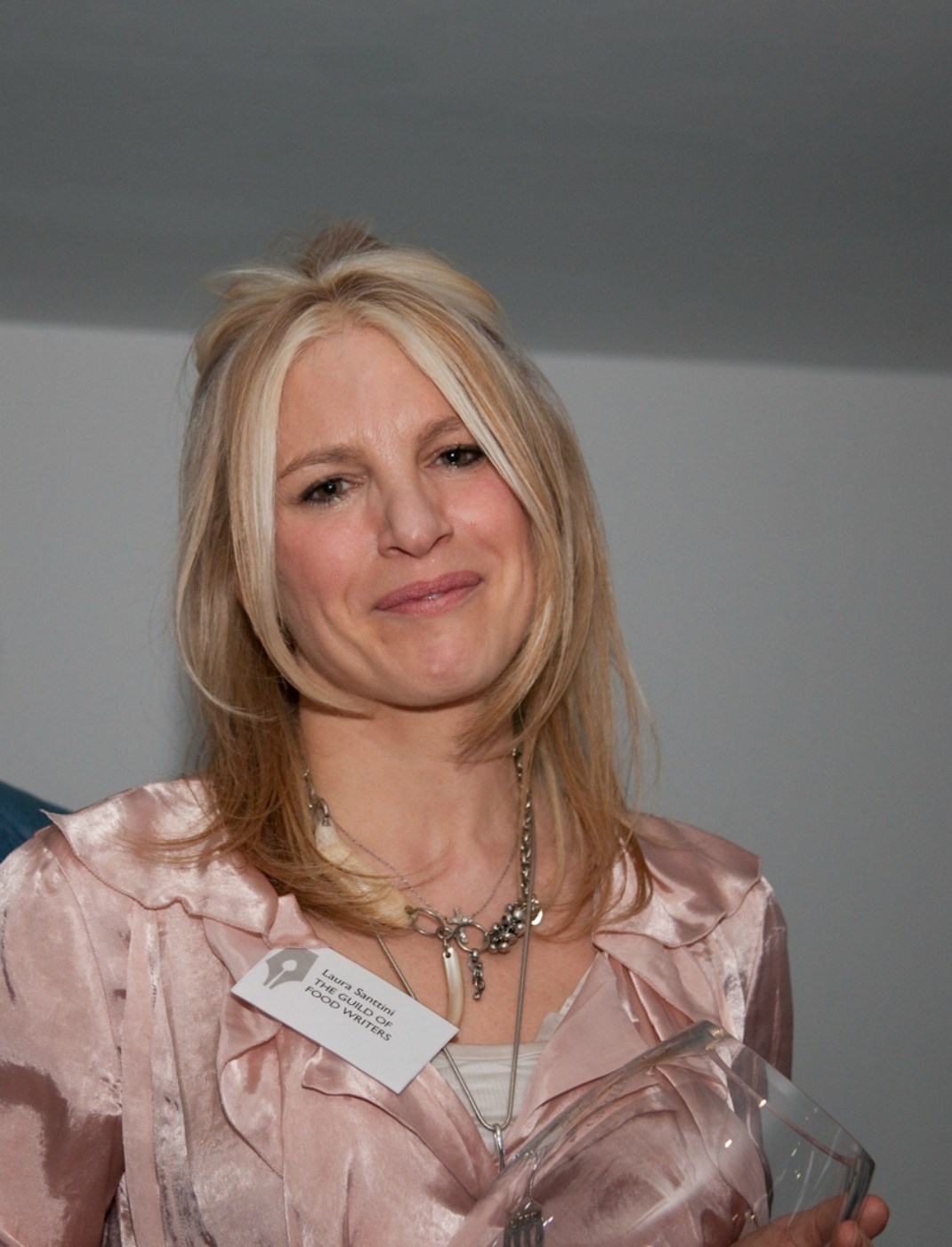 There were also prizes for less well-known authors. Laura Santtini’s triumph in the Jeremy Round Award for Best First Book category with Easy Tasty Italian was a lovely moment, while Gaitri Pagrach-Chandra won the Cookery Book of the Year Award for her international baking collection Warm Bread and Honey Cake. 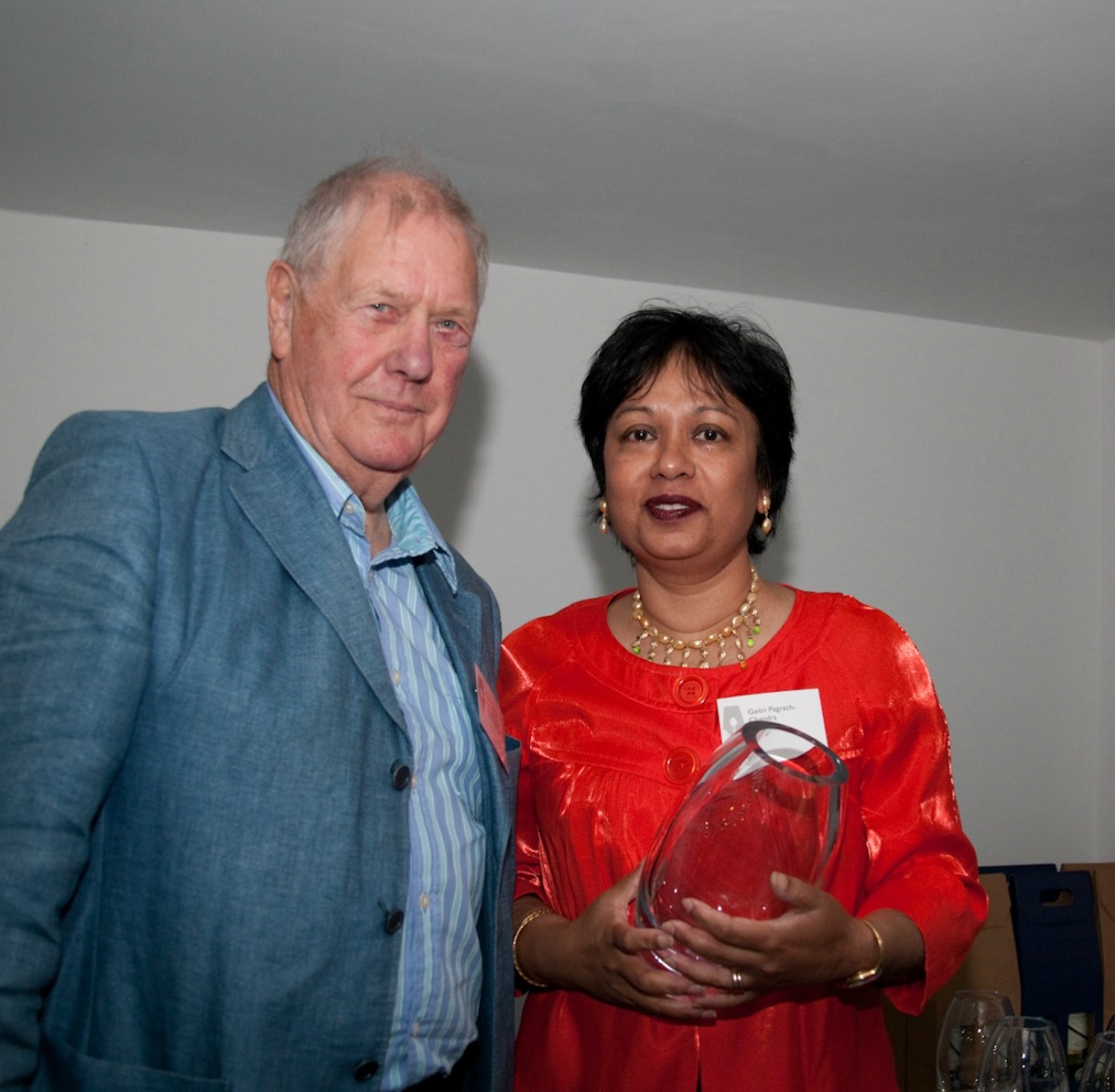 Alex Renton also won his first Guild Award for Food Journalist of the Year, for work published in The Times and The Observer. 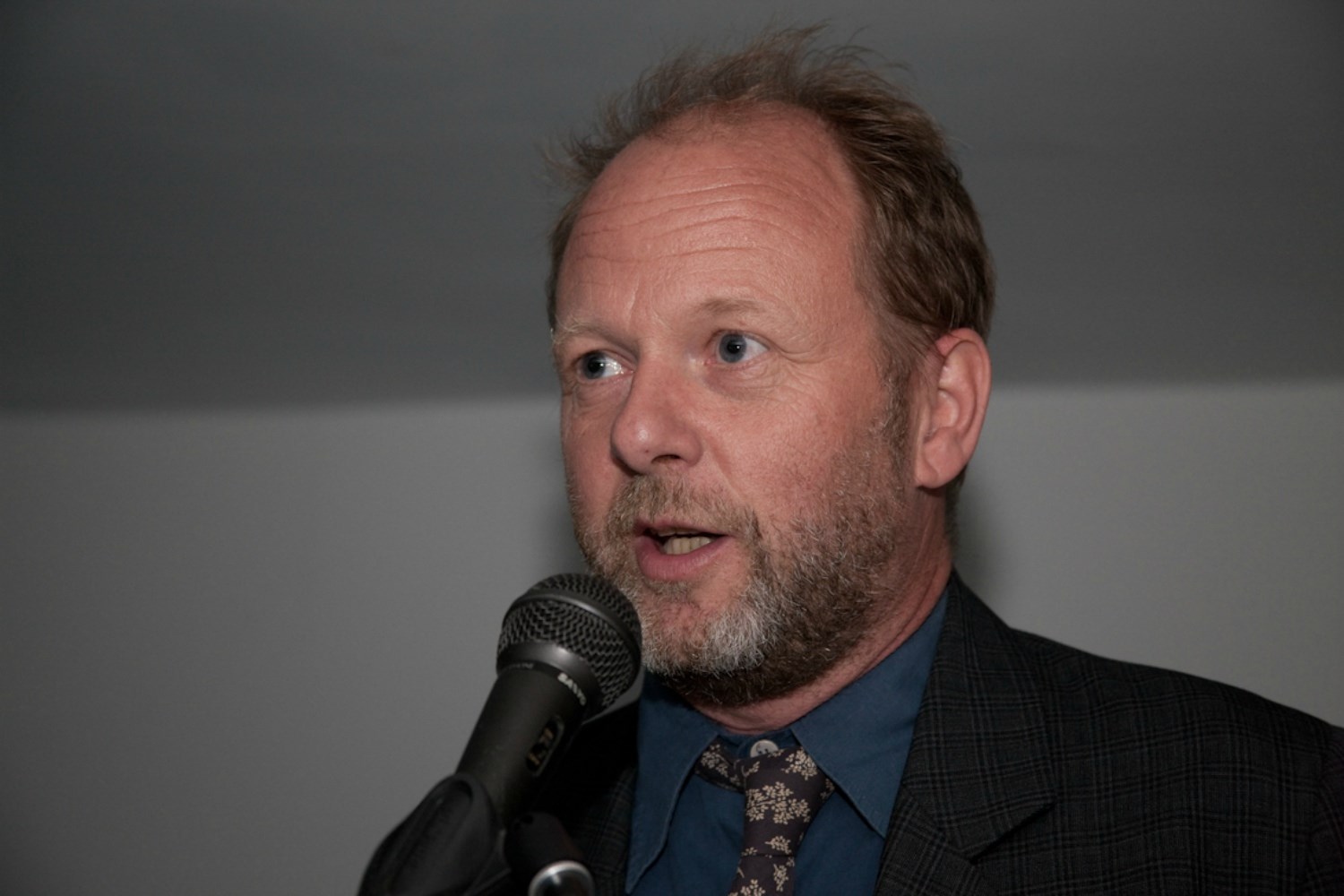 Those with even more crowded mantelpieces this year include Tracey MacLeod of The Independent, who won the Restaurant Reviewer of the Year Award for the second time, and Hugh Fearnley-Whittingstall, who has co-authored two past winning books. 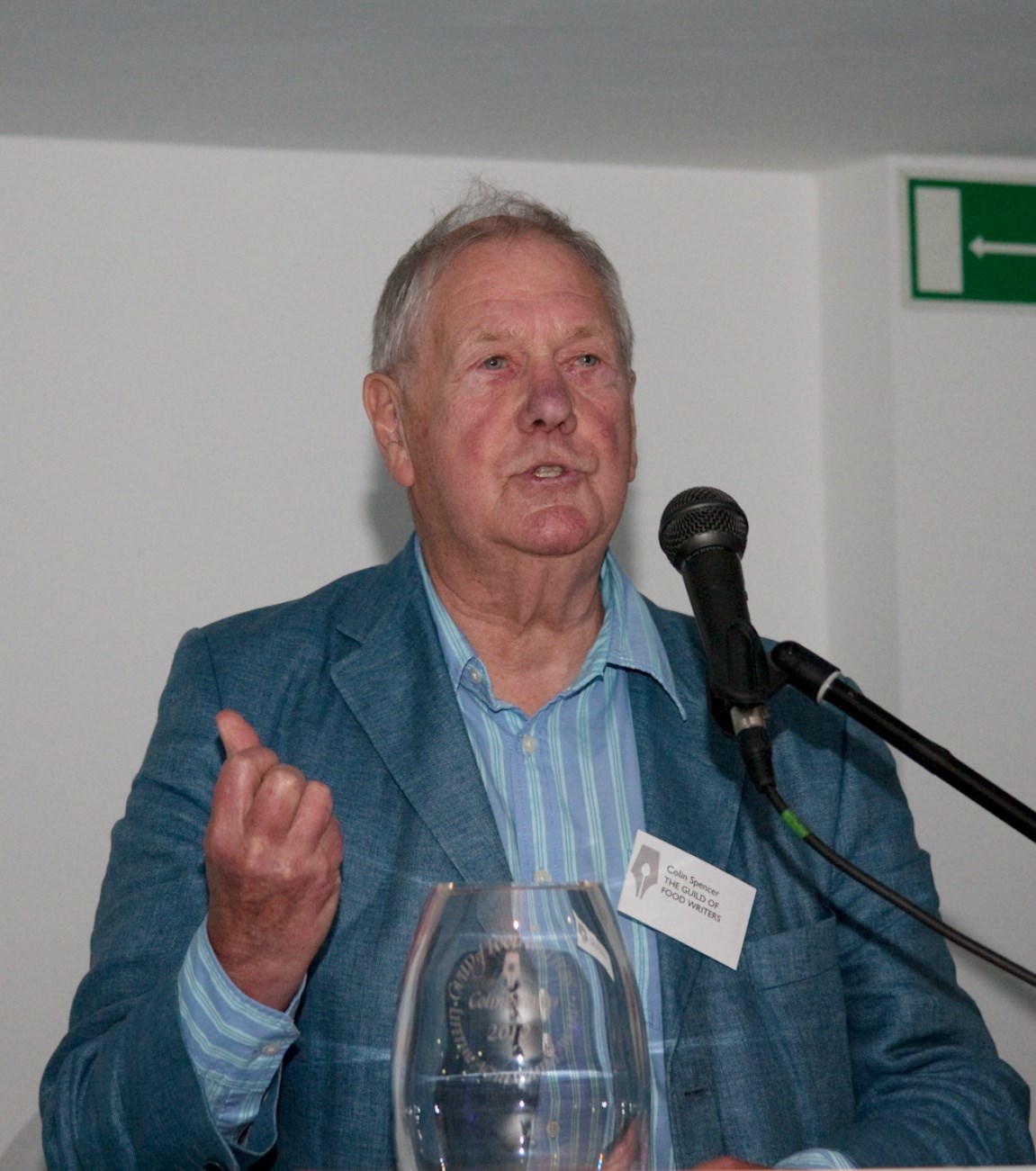 The crowning glory of the evening came when Guild President, Jane Suthering, surprised one of the Guild’s most renowned members by presenting the Lifetime Achievement Award to pioneering journalist and scholar Colin Spencer. He joins the pantheon of recipients who become Guild Life Members, including Mary Berry, Hugo Dunn-Meynell, Marguerite Patten CBE, Katie Stewart, Grace Mulligan and Liz Burn. Last year’s Lifetime Achievement Award was presented to the late Egon Ronay, who had presented the Awards. 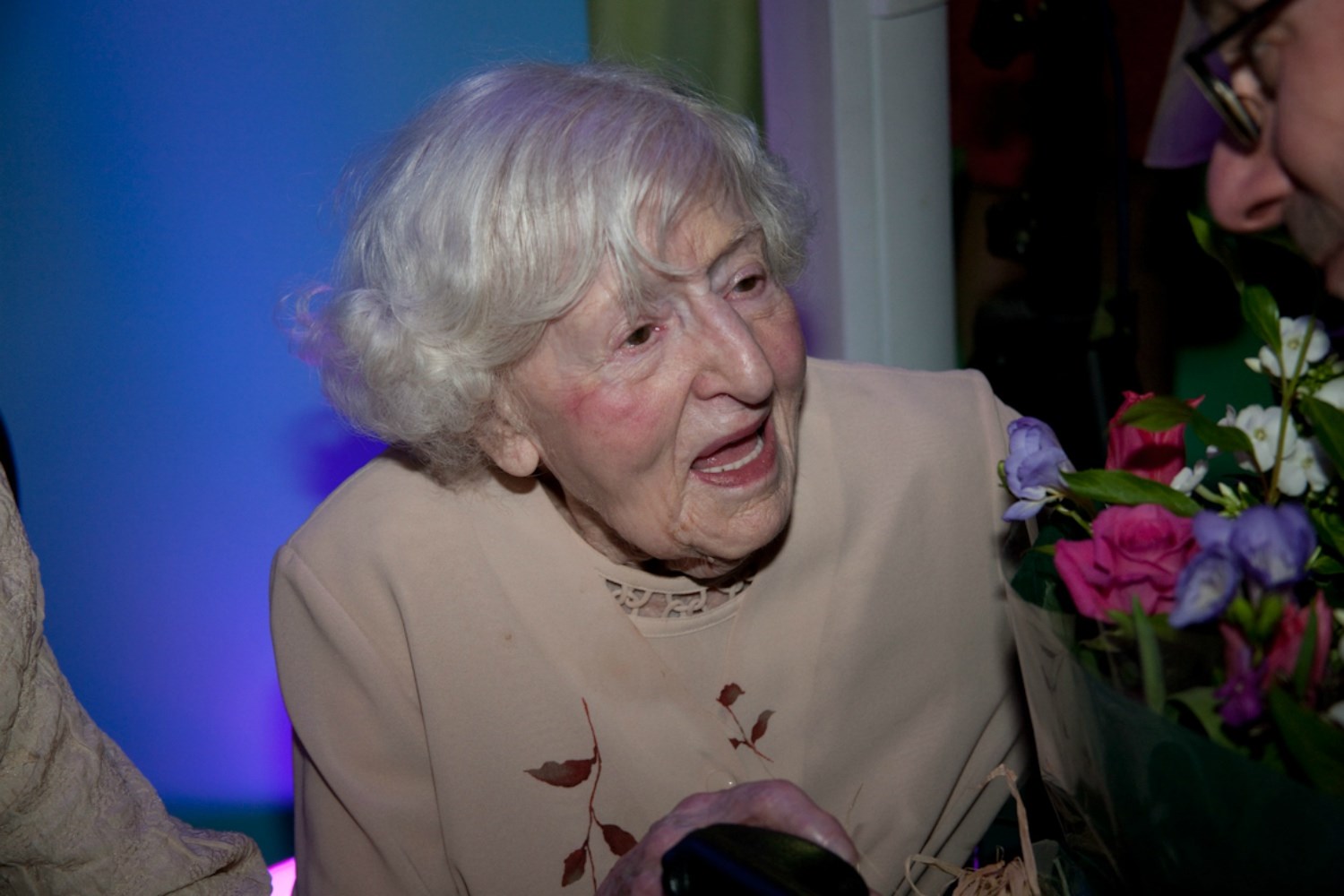 Guild Life member, Marguerite Patten being presented with flowers to celebrate her CBE

Guild president, Jane Suthering, commented: ‘What a fantastic party, and a great way to celebrate talent in the industry. Congratulations to all our shorlistees, and especially the winners.’

BBC Radio 4’s You and Yours: Food Scares series presented by Simon Parkes 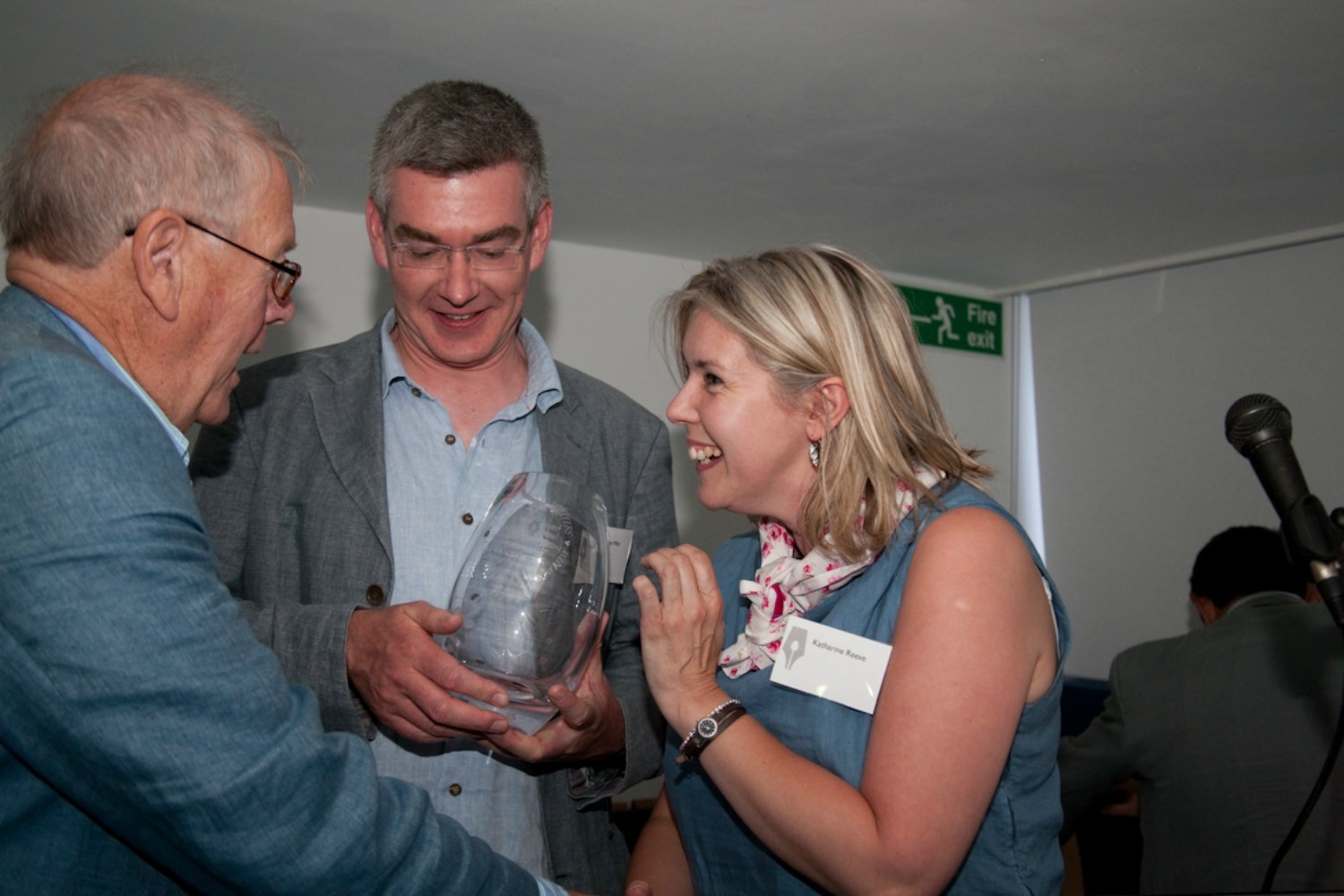 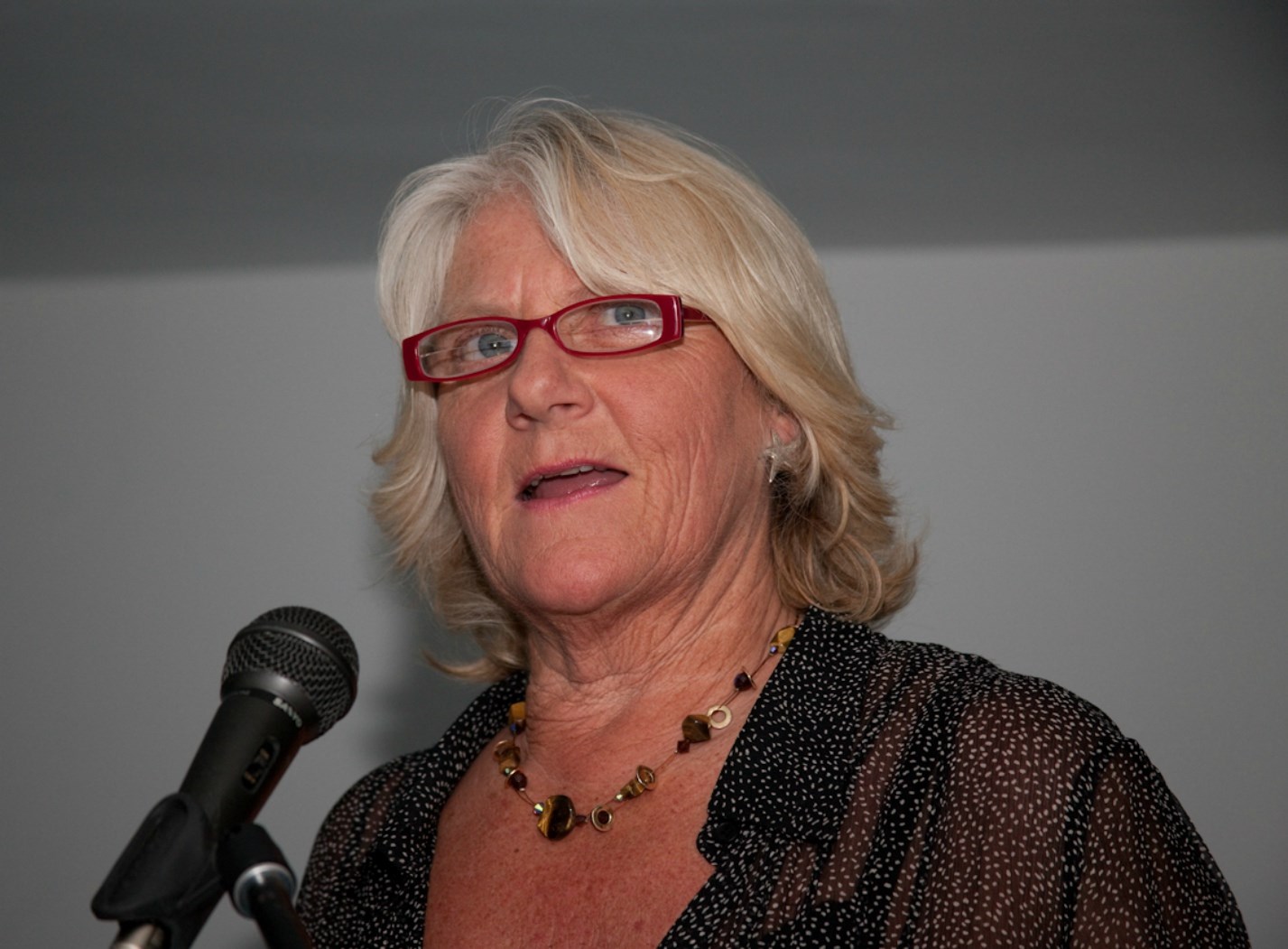 Winner: Alex Renton for work published in The Times and The Observer Food Monthly

Winner: Michael Booth, Sushi and Beyond: What the Japanese Know About Cooking, Jonathan Cape

Tom Kevill-Davies, The Hungry Cyclist: Pedalling the Americas in Search of the Perfect Meal, HarperCollins 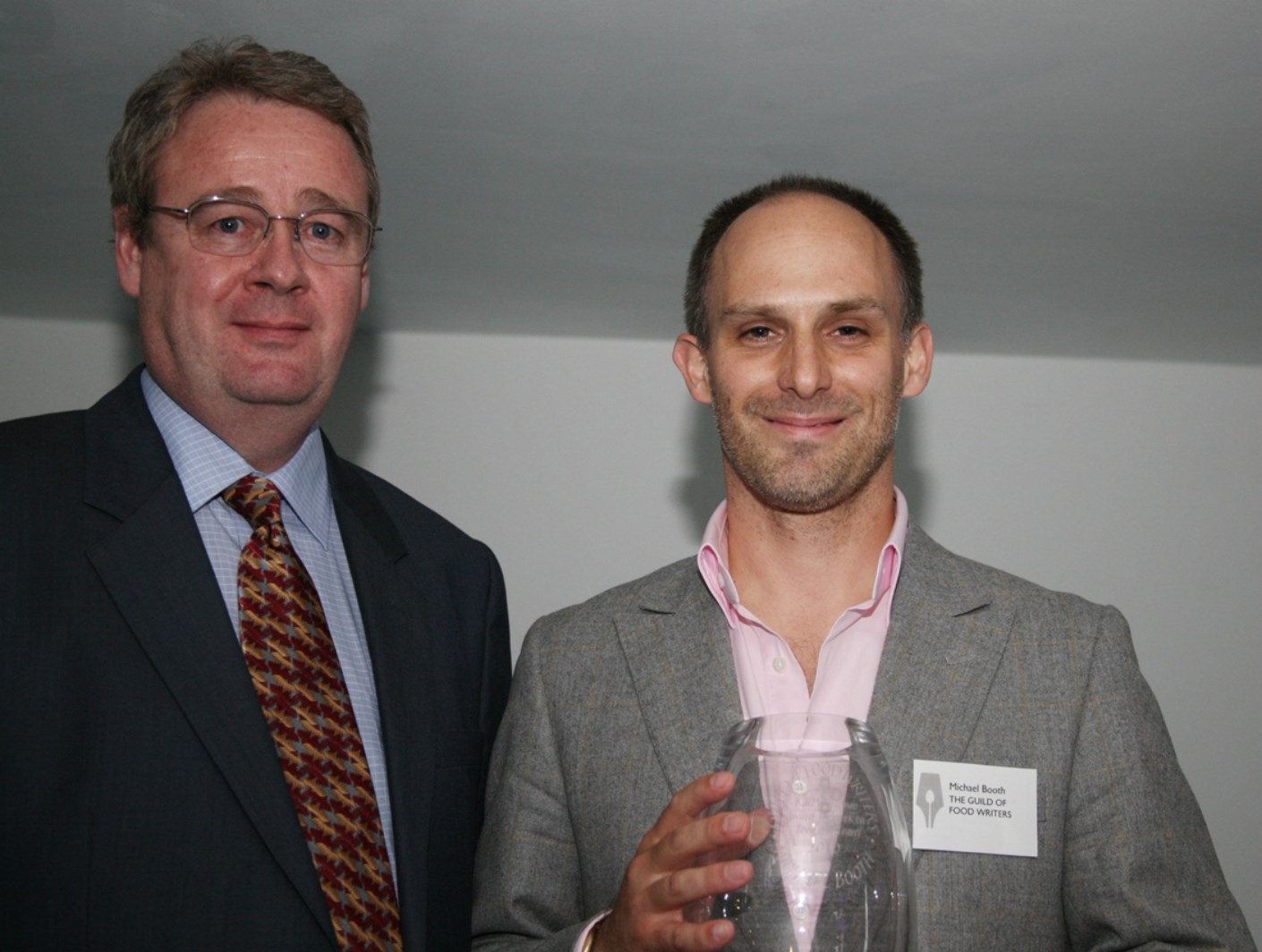 Winner: Tom Parker Bowles, Full English: A Journey Through the British and Their Food, Ebury Press 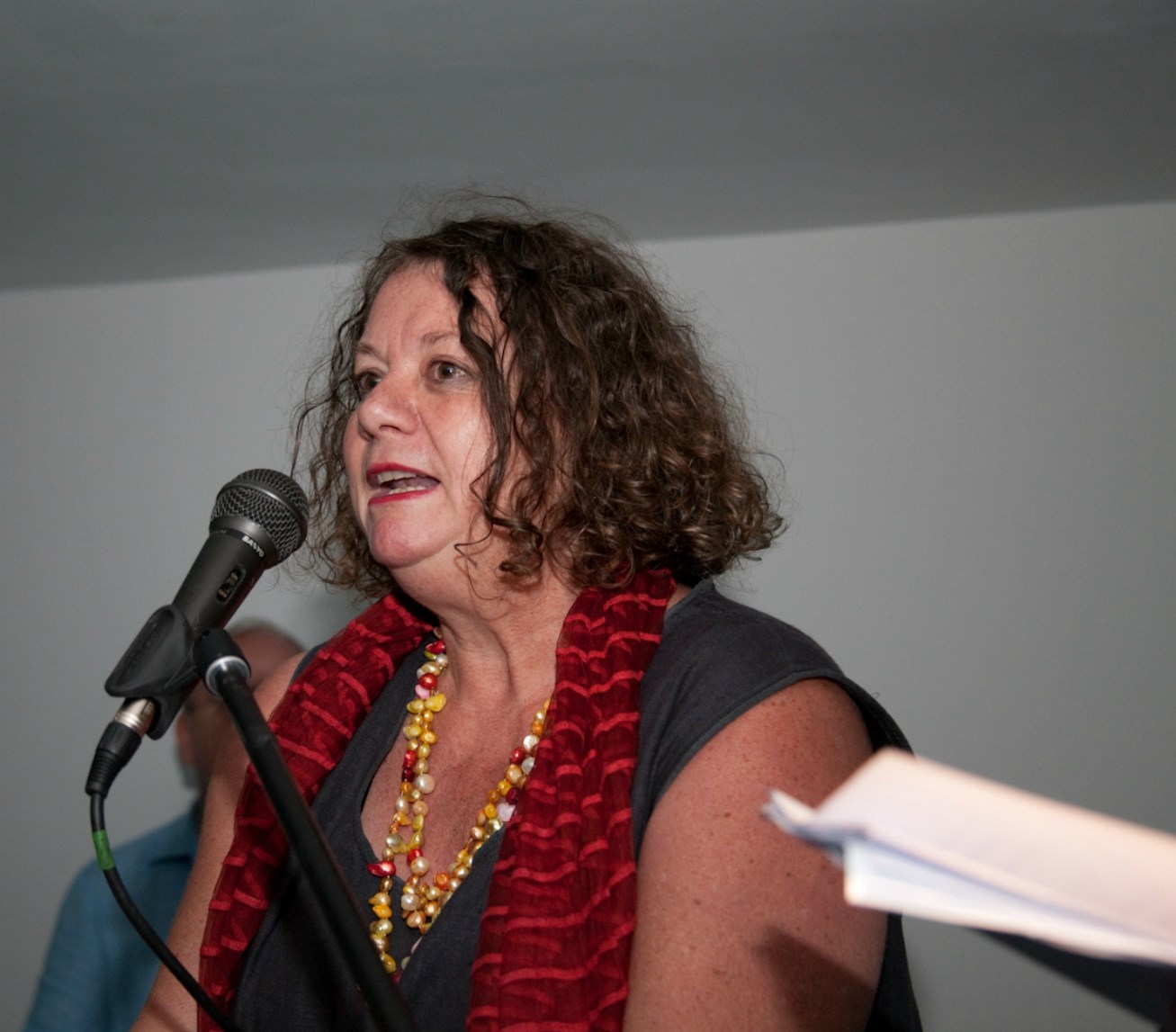 Winner: Tracey MacLeod for work published in The Independent Magazine

John Walsh for work published in The Independent Magazine

Colin Spencer, the distinguished ex-president of the Guild and renowned artist, author, journalist and broadcaster, presented the Awards at this year's Guild of Food Writers' Awards. The Guild Awards are the UK's biggest food book, writing and media awards. 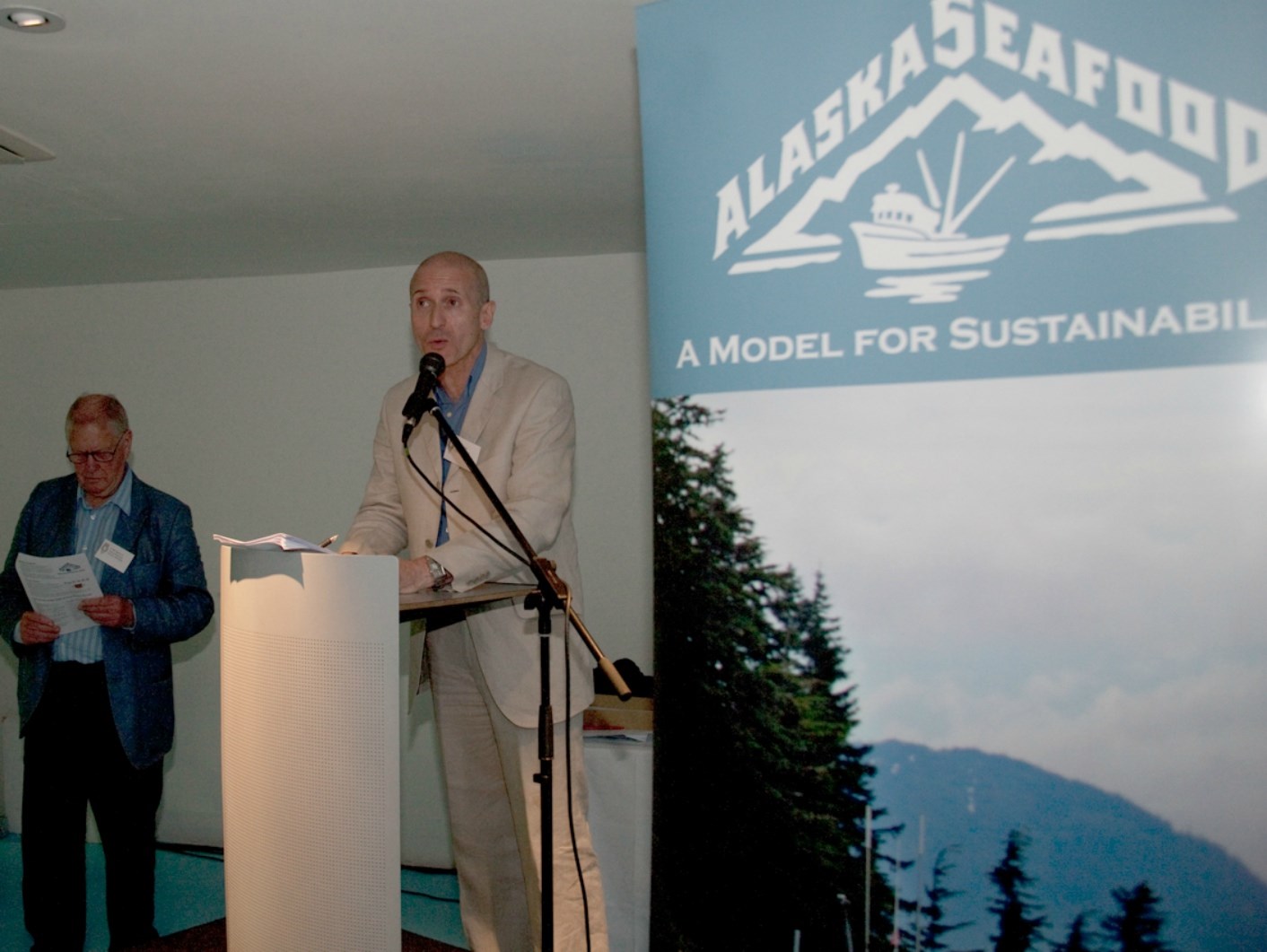 This year’s ceremony was held on Thursday 17 June in the Design Museum Space on the second floor of the Design Museum building, Shad Thames, London SE1 2YD. The evening was compered by BBC Radio Leicester’s Bill Buckley.

A delicious hot and cold canapé menu was specially devised by Blueprint Café’s popular chef and Guild member Jeremy Lee, this year a judge in BBC Two's Great British Menu. Jeremy developed the menu in conjunction with the Guild's events coordinator, Colin Pressdee and the Alaska Seafood Marketing Institute (www.alaskaseafood.org) to showcase wonderful sustainable wild seafood including salmon; black cod; pollock; pacific cod and King crab. The Guild is thrilled that Alaska Seafood was the main sponsor for the Awards for the third year running. 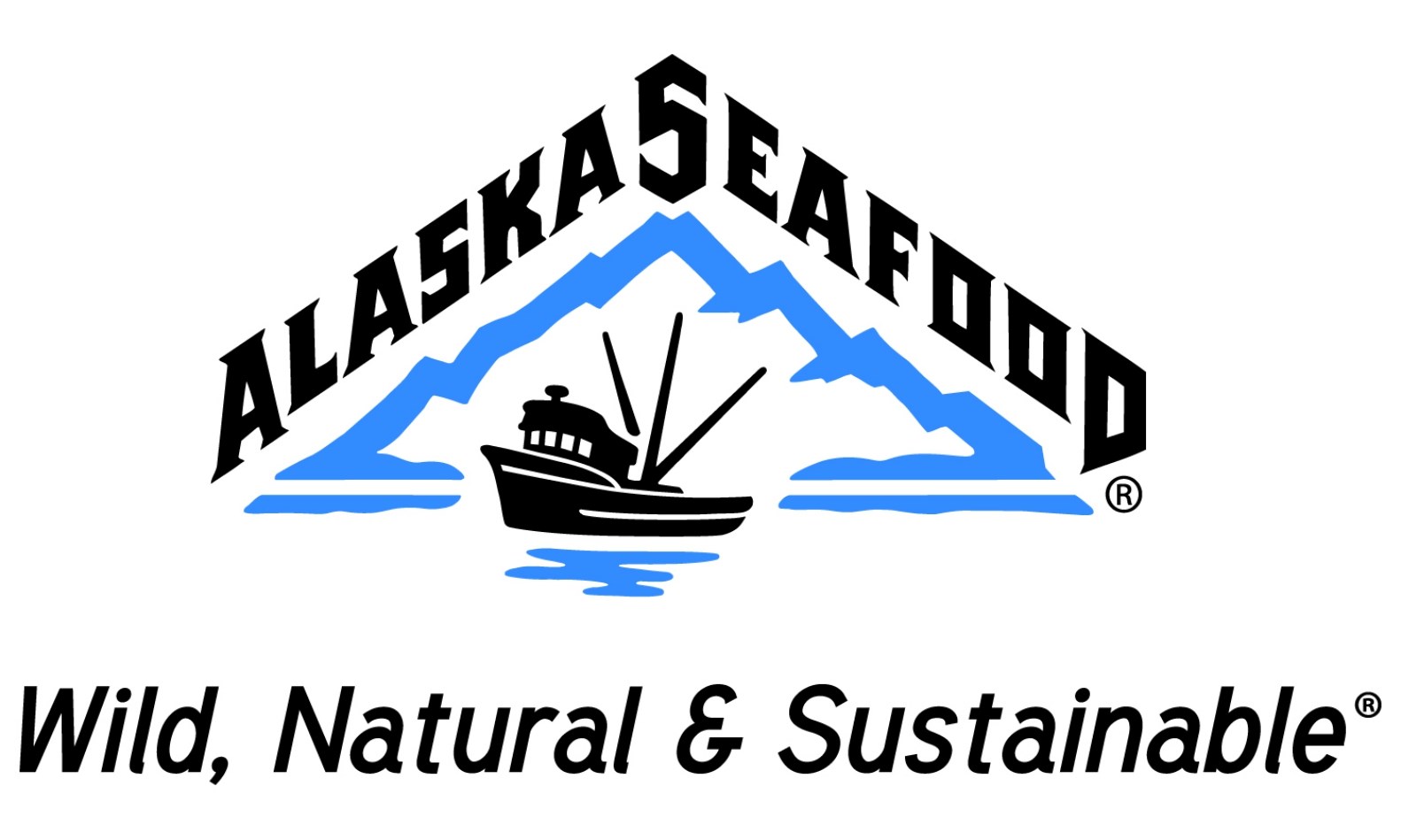 For 50 years Alaska has been a world leader in sustainability. In 1959, when the State of Alaska was first established, the constitution mandated that all fish should be maintained sustainably.

All Alaska Seafood is wild, and all of it is sustainable. Each fishery is assessed annually and is given a total catch quota. Once that quota is reached the fishery is closed - to preserve stocks for future generations.

Entire communities have been intimately involved with the harvesting of Alaska's seafood. Alaskans have always understood that the fishing industry cannot exist without a willingness to help enforce the sustainability practices set out by the State.

Torres commitment to combating climate change and preserving the environment makes them leaders in the wine industry. For five generations, Torres has been at the forefront of producing quality wines from the heart of Catalonia. The Torres family sees themselves as stewards of the land, working closely with nature, to preserve the tradition of winemaking for future generations.

For more than 20 years, the Torres family has avoided using chemical pesticides and herbicides in its vineyards. The Nerola red and white wines, served at the Awards party, are the first wines Torres have produced in Spain that are scrupulously made using organic farming methods; fruit of a love of nature and the determination to preserve the environment. The rosé served, De Casta Rosado, illustrates the Torres winemaking traditions by celebrating its 40th Anniversary in 2010.