Each month, newsletter editor Kristen Frederickson meets a Guild member with a story to tell. This month: Elisabeth Luard, who was the recipient of the Guild’s Lifetime Achievement Award in 2016 in recognition of the rich talent and unique voice she has demonstrated since the publication of her first book, European Peasant Cookery.

Please give us a little insight into your life and career.

My career as a food-writer came about more or less by accident in 1978, when I was offered a weekly cookery column with illustration by the then-editor of The Field. At the time, I had not long returned to London with four children who'd spent their early schooldays in the wilds of Andalusia (a story documented in the first of my four memoirs-with-recipes, Family Life: Birth, Death and the Whole Damn Thing). Married at just 21 in 1963 to Nicholas Luard, satirist and co-proprietor with his friend Peter Cook of Private Eye, later a novelist and travel-writer, I had been supplementing the family income as a natural-history artist with botanical drawings for Kew and birds for London's Tryon Gallery. The editor saw my work at the gallery and commissioned an illustrated piece on the botany of the road to Ronda, the subject of my work for Kew. The piece was published and the editor, invited to dinner at our family home in south London, realised that I could not only cook but was happy to skin a rabbit – just the ticket for the readers of the magazine. The offer of a weekly cookery-column with illustration followed – something of an innovation as it was the first in the magazine's history. Over the years I have contributed regular columns to magazines and newspapers including The Scotsman, House & Garden, Daily Telegraph and Country Living. For twenty years, I have contributed a cookery column to The Oldie magazine whose founding editor, Richard Ingrams, was my employer as shorthand-typist and general dogsbody in the early days of Private Eye (for the record, employment at the Eye predated my future husband's proprietorship!).

How long have you been a member of the Guild, and how did you come to join?

Pretty near the beginning, 1987 or 1988, not long after the publication of my first serious cookbook, European Peasant Cookery, at the prompting of Jane Grigson during one of the early gatherings of the Oxford Symposium on Food & Cookery. There was a lot of cross-over. At the time, both groups were small and the organisation was – how to put it delicately? – eccentric (particularly the Symposium) and everyone more or less knew everyone else.

Where are you based, and does your location influence your work?

As of two years, I'm back in London, the city where I was born (a war-baby – fireworks still make me jump). While I've lived intermittently in the capital throughout my life, for the previous 25 years my home was a remote farmhouse in the foothills of the Cambrians in mid-Wales. While Nicholas departed the planet in 2004, home for both of us before the move to Wales was a cottage and garden in the Hebrides, my husband's home-territory. Andalusia was where we first settled down as a family (home territory for me – as a diplomat's step-child on the LatAm circuit, I spoke Spanish from a very early age). Every place I've ever lived has contributed to – perhaps even dictated – my work, as have travels on behalf of the magazines I've worked for. I use a sketchbook and watercolours rather than a camera for a visual record (I have hundreds and use them regularly as story-boards when writing). My children used to complain that supper was often late because the cook simply had to sketch the ingredients.

Your profile as a food writer, demonstrator and cook has carved out a very specific role for you as a well-known travel and research writer. How did you decide that rather than being more of a generalist (as many of us are), you’d like to address one particular area of the food world?

I'd call myself a generalist with a particular interest in home-cooking as related to place, time and people. This was partly the result of a peripatetic childhood and partly the effect of what I'd call benign neglect – nothing wanting materially, but with a father killed in the war and our mother busy with a new family, my brother and I were allowed to run wild – spending most of non-school time with our mother's cooks and maids and going home with them at weekends to sleep on an old bus-seat with chickens running in and out. As a teenager sent to boarding school on the Welsh borders, I'd often join my maternal grandparents in France or Italy during school holidays, arriving often several days before they did (my granddad gambled away the family fortune in Monte Carlo and elsewhere). This taught me two things: to appreciate haute cuisine and rely on my own devices – handy for a travel-writer. For the rest, a year at the Eastbourne School of Domestic Economy taught me the culinary basics and another at art school, City and Guilds in Kennington, taught me to draw. Added to that, I've been a voracious reader since my schooldays, while the botany and birding means that I can 'read' a landscape and know pretty much what to expect of an indigenous culinary habit just by looking.

In your long list of publications, is there one book that stands out to as one you’re especially proud of, and if so, why?

Can I have two? European Peasant Cookery (US: The Old World Kitchen) and Family Life: Birth, Death and the Whole Damn Thing. The first is the cookbook I really wanted to write but didn't think anyone would publish (first published 1986, never out of print thereafter). And the second because, though most of the book is a story of sunshine and children going to school on a donkey, gave a voice to my daughter Francesca who died of an AIDS-related illness in 1994 (and no, she wasn't a bad girl – just picked the wrong boyfriend).

How has being a member of the Guild been helpful to you, or influential for you, if it has?

Membership has been important to me throughout my food-writing career as a reference-point and reassurance that I was in like-minded company. There have been times when I haven't been able to attend gatherings or events in London, but I'm happy to be able to do so, now I've returned to the city. I particularly enjoy the freedom of access afforded by electronic communication – as a recent recruit to the Facebook page, my kind of gathering. And I am, of course, delighted and privileged to have received the Guild's Lifetime Achievement Award in 2016 – I was sitting with Jill Norman in the audience and a little distracted till I began to listen and thought how unusual it was that someone else has such a similar life-story to my own!

Is your family involved in the development of your work, and if so, how? For example, do you include anecdotes about your life in your writing?

I wouldn't be a writer without my family. Married to a novelist and travel-writer, it took time before I had the confidence to cross over into my husband's territory, albeit not the same area (though I do have a couple of novels under my belt). Although our four children take a starring role in my first memoir, Family Life, Nicholas is centre-stage in the third, My Life as a Wife, while more recently, cooking with three grandchildren is the heart and soul of A Cook's Year in a Welsh Farmhouse. Whether travelling or writing (four memoirs, two novels and some 20 cookbooks at the last count) the experience of taking responsibility for a young family in a remote valley among a self-sufficient farming community is the solid ground beneath my feet.

How was the world of food writing changed since you entered the field?

Food-history wasn't considered a subject for serious academic study in 1978, when I first started writing recipes for The Field and working on European Peasant Cookery. At the time, female food-writers weren't expected to earn a living since they could expect to be supported by husbands. Nor was their work considered literature, with the exception of M.F.K Fisher in the US and Elizabeth David in the UK. Food-writing is now seen as a profession – not least as a result of high-profile tv chefs, both male and female – though it remains hard to earn a living in the genre. The most important change, for me at least, is the appearance over the last twenty years of well-written, carefully-researched, intelligently-illustrated regional cookbooks written by those native to the culture. Impossible to judge whether this is the result of a more sophisticated and well-travelled readership, or the hard-earned respectability that's now conferred on writing about food and cookery – let's hope it's both!

Since we’re entering the festive season, please can you share with us a hint of your holiday traditions, and give us one of your magical sketches? Thank you so much.

Our Christmas traditions have always been a moveable feast – dictated by wherever we've found ourselves, though now my children are grown and gone with families of their own, they've developed their own traditions. But while I still had (loose) control of the decision-making process, France, Spain and Italy were our destinations of choice, with the result that we became accustomed to the Fasting Supper of the Eve as celebrated in Provence with brandade de morue, plain-cooked veg with cardoons and aioli, followed by a bûche de noel ordered in advance from the bakery. In Andalucia, the Christmas treats were pata negra ham from our own stye-pig, almond-and-honey turron (Jijona, the soft kind, and the crisp whole-almond torta imperial) and a Boxing Day paella on the beach. Christmas day was not much of a celebration at that time – Andaluz children received their presents on 6 January, when the Three Kings turn up the stable in Bethlehem. And when the eldest, Caspar, moved to New York for work and fell in love with a beautiful New Englander, we spent Christmas on Long Island so she could join us. So we skipped the turkey – Thanksgiving being the main midwinter event in the US – and feasted on Long Island lobster and profiteroles with chocolate sauce. This year I'm happy to say I'll be in Paris with the New Yorkers, including two almost-grown-up granddaughters. As for the menu – who knows? My daughter-in-law is a food-stylist as well as an excellent cook. I'm sure it will be as beautiful as it's delicious. 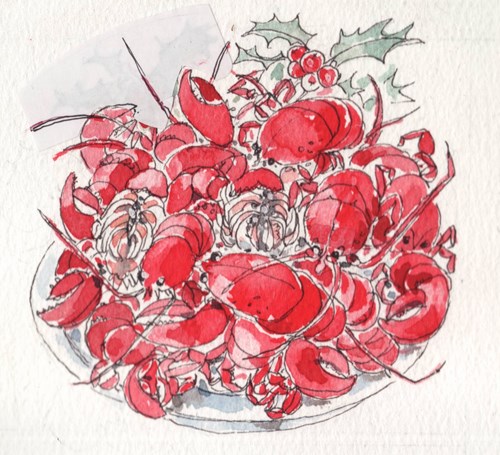 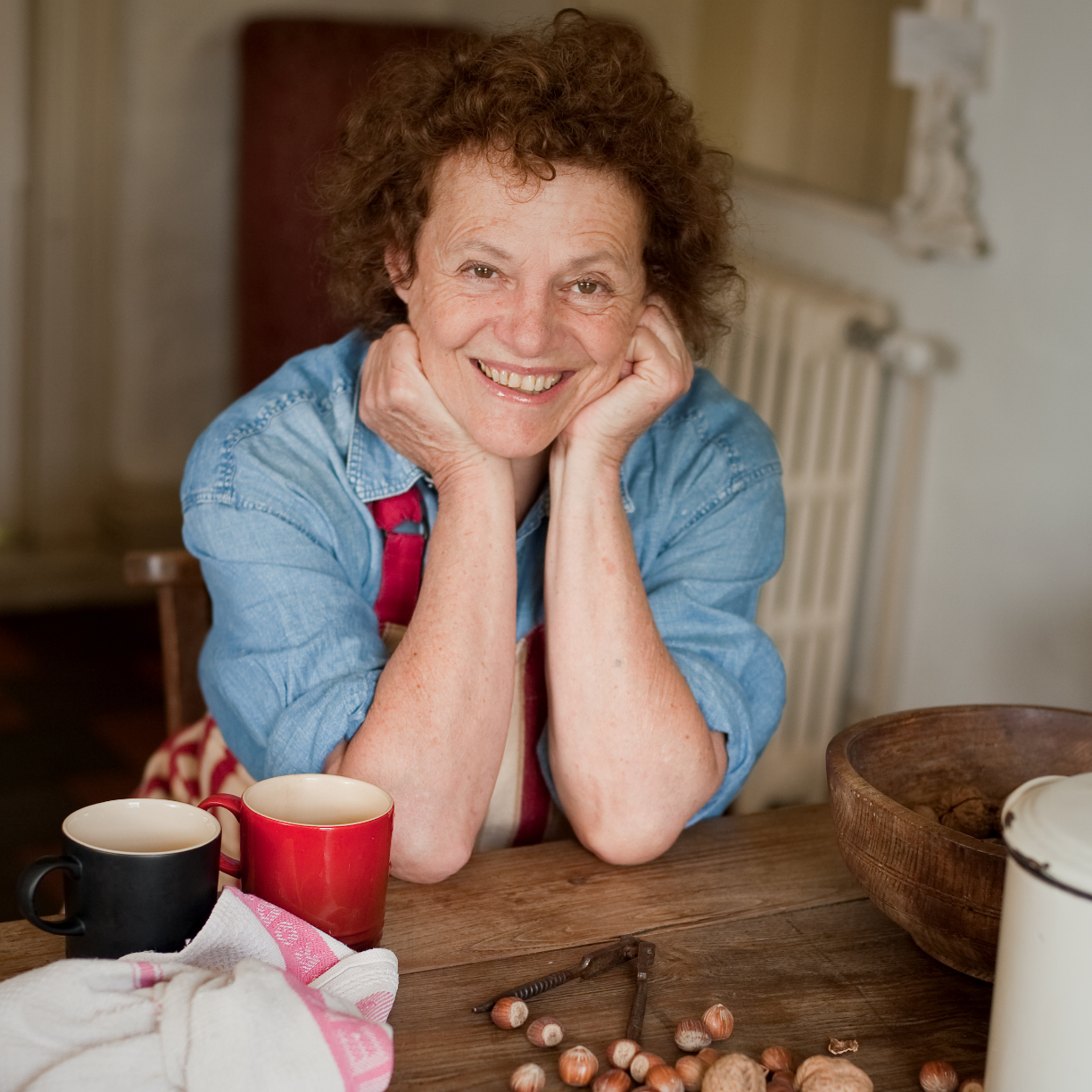